I've never been to a strip club. I was ordered to meet a contact in one a few hours into Grand Theft Auto IV, but I was able to close my eyes and turn off the console about three seconds after receiving the mission so I came out of the situation relatively unscathed. Don't get me wrong, I'm not a prude by any means. Naked women don't bother me at all so long as they don't call me names or come anywhere near me. 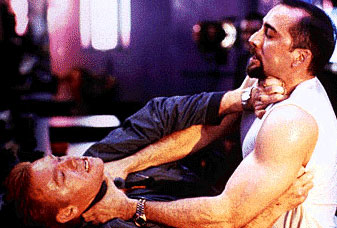 My aversion to strip clubs is purely philosophical in nature, partially because the billboard for my local gentleman's establishment reads Socra-tease: Come Ogle Our Aristotles And Eat Platos Of Our Free Buffet.

Even if I don't get the appeal of strip clubs, guys will continue to patronize them so I might as well make the best of a bad situation and offer up a few simple rules of etiquette. It's true that I don't have any firsthand experience to base this advice on. I did, however, see Kiss Of Death, which featured Nicholas Cage living in a strip club and choking David Caruso. That makes me something of an expert.

No Touching!
Every strip club has a strict "no touching" policy, and violating it will get you thrown out by a greasy dude with a ponytail and a fanny pack strapped around his pot belly.

Training yourself to deal with this isn't too difficult. Order several glasses of water, then use your face to tip them over on the very edge of your table. Now maneuver your mouth to catch the liquid as it pours out. In no time at all, you'll be ready to drink the adult beverage of your choice without using your hands.

Safety First
Small children should be strapped into their car seat, facing away from the stage. 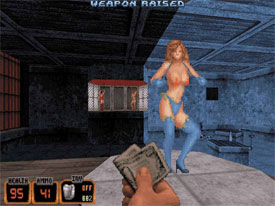 The young ladies who dance in strip clubs make the majority of their money from tips, much like waitresses and congressmen. How do you know when it's appropriate to tip? Wait until your stripper has just finished an impressive feat, such as doing a backflip or intentionally separating her shoulder then popping it back in. If it helps, imagine that she is a seal at Sea World. Move in to tip when it seems as though she should be clapping her flippers together and barking.

Knowing how much to tip can be tricky. You don't want to be stingy, but then again you want to have enough money left in your wallet to keep any potential muggers from pistol whipping you.

Somewhere A Little More Uncomfortable
You may be propositioned by a stripper to join her in a private room. Tempting as it may seem, do not accept! She only wants to make you move heavy boxes around the office and rearrange the furniture.