Peter Molyneux has been remarkably silent as of late. After he hyped the original Fable as the be-all end-all rpg, the surprisingly fun game come under fire for not adjusting the world's wind patterns to react to every butterfly you displaced as Molyneux had promised.

Having learned his lesson, Molyneux slowed the hype train for Fable 2 down until it became a stealth hype scooter. While this strategy will ultimately help the public's perception of the final game by keeping expectations low, I sort of miss loading up Shacknews every morning and discovering another one of Peter's rambling and impossible promises.

After rescheduling four hours that I normally set aside for Jazzercise, I worked my way through every public statement that Peter Molyneux has made about Fable 2, hoping to come across a few outlandish statements that managed to fly under the radar. I wasn't disappointed.

"Players will be able to adjust the volume from 1 to 100 in increments of 1. You could play the game 100 times and have an entirely different experience."
- December 2006 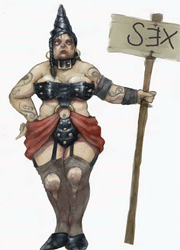 An actual piece of official artwork for Fable 2. Can the game topple Postal 3 in the forced humor department?"Obviously there was a lot that we wanted to do in Fable that had to be left out, but we're putting all of that in Fable 2. For instance, the game can monitor how often you turn to your left or right while walking, running, or just spinning in place. The gamer's subconscious decision to turn one way more than the other will be reflected in the character model as one side of his body becomes much more muscular than the other.

While this will ultimately make you stronger and faster when turning to your preferred side, it will also have unforeseen consequences. If you shake another character's hand with your muscular side, you can hurt them so much that they will harbor an unfavorable opinion of you. Shaking hands with the weak side of your body will make you seem foppish and weak. All of this will be reflected in the way that townsfolk compulsively yell stupid shit at you every single time you walk by, completely destroying any immersion that might have previously existed.

It's a fine line to walk, and we can't wait to see how gamers react to such emergent gameplay."
- March, 2006

"You can have a dog as a companion, but he will be so much more than a normal pet. He will, for instance, bark when you least expect it.

Sometimes I forget that the dog is just a character in the game and I buy dog food when I go grocery shopping! Sometimes when the dog barks, I think that maybe he's the closest friend I will ever have. Sometimes I regret the decision to code dog cancer into the game."
- January 2007