I have never touched an Amiibo. The phrase "Toys To Life" only makes sense to me as a plot summary of Weird Science coming from someone with a severely limited vocabulary. Somehow I've completely missed out on this enormous trend of collecting figures to plop down and control in my video games.

Disney sent me an enormous box. Allow me to provide you with an exclusive text-based unboxing: Inside was Disney Infinity 3.0, a USB-powered base, the Twilight of the Republic Star Wars playset, the Toy Box Takeover expansion, some clear plastic things called Power Discs, and four figures including a Yoda and an Obi-Wan (the only two that matter). 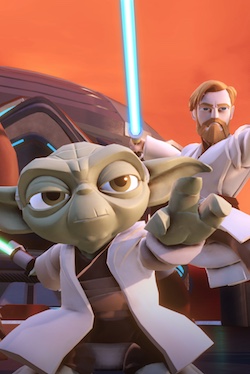 Let's start with the figures. I hate to begin on a sour note, but these things are nowhere near life-sized. I've watched the Star Wars movies. Obi-Wan should be the size of a normal man. Yoda is a little guy, but there's no way he's two or three inches tall. I'd say these figures are half the size of their real life counterparts. Oops! Someone fell asleep at the Infinity figure assembly line.

Setting aside their outlandish size, these are actually very nice objects for a man in his thirties to hold in his hand, look at, and consider displaying on his computer desk while telling himself there's nothing shameful about any of this. One thing sets the Infinity Star Wars figures apart from all other Star Wars merchandise that's been barfed onto store shelves over the last few months: An actual art style. They've got a nice mix of simplicity and expressiveness going on, like the character designs from Genndy Tartakovsky's Clone Wars cartoon modeled by the Team Fortress 2 team.

You slap these guys down on the base, which is essentially a plate designed by someone whose mission in life is to fuck up a square beyond recognition. There are so many unnecessary angles and corners on this thing that I'm convinced it's an actual puzzle piece. If I could assemble the entire thing the picture would become clear - a collage of unused, better base designs.

I didn't know what to expect from the game itself, but there's certainly a lot more stuff going on than I anticipated.

The Toy Box mode drops you into a circular plaza filled with quest-giving NPCs. "Hey!" says one guy, "Come over here and I'll tell you how to drive a spaceship!" "No," says another, "come here so I can tell you how to put a Roman legion helmet on your companion!" Yet more chime in with offers to teach important lessons such as designing my own house (I've got a house, apparently) with a magic wand, using combos to fight bad guys, downloading player made levels, finding my way through mazes, and how to drift a landspeeder as I take on a series of kart races.

What the heck is going on in here

The Twilight of the Republic playset is a little more straightforward. It's a story campaign, mostly focused on third person platforming and combat with occasional detours into wall-climbing, puzzle solving, and vehicular sequences. This is obviously a kid-friendly game so the entire experience feels like an amusement park ride through Star Wars, but the presentation is on point and there's a depth to the systems that's appreciated.

Also, controlling your character just plain feels good. Movement is fast and responsive, with dashes to close distance, double jumps (or in Obi-Wan's case a handy super jump), and sidesteps. You've got a basic force push at your disposal to stun bad guys or break containers or push someone off the edge of a cliff. You can launch enemies into the air and juggle them, deflect blaster fire, block heavy attacks, and break through opponents' attempts to block.

Unfortunately, there's no lightsaber dismemberment. Looks like you'll have to keep Jedi Knight II installed and turn on g_saberrealisticcombat.

Disney Infinity 3.0
The combination of Star Wars and collectible figures seems like a risky proposition, but somehow it works! 8/10