The Last Of Us 2 Leak: Full Details VERY Real

A disgruntled Naughty Dog employee has spilled the beans all over the internet and gamers are pressing their grubby faces against the floor to slurp up those nasty beans. That's right, nearly every important detail about The Last Of Us 2 has been leaked. I've combed through the beans for the best beans.

In this situation, beans refers to details about the game. Here are the best beans (details). 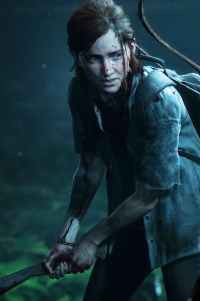 The game's full title is The Last Of Us 2: The Alien Wars.

In addition to Ellie you will be able to select a second playable character, Mecha-Joel, who trades off narrative gravitas and the exploration of same-sex attraction for a double jump.

This sequel introduces quad damage powerups in the form of quad damage icon holograms hovering in the environment. You'll be able to tell them apart from decorative quad damage holograms because they spin and when you get close a masculine voice roars, "QUAD DAMAGE! ULTRA COOL!"

A newly implemented Vancian magic system requires you to rest after using up your daily allotment of arcane powers.

Enemies are now full of twice as many guts and three times as many bones and four times as much blood, and all of it pops out when you kill them. Rad! And poignant!

Beating New Game+ mode will unlock a fourth playable character, Kratos/Lara Croft (depending on whether you choose male or female).

Ellie's iconic shoes were designed by Gucci. Every time she crouches down to do stealth she remarks, "Glad I'm wearing my iconic silent sneakers by Gucci." Some of the emotionally weighty scenes in the game include multiple cuts to camera angles which prominently display the shoes.

If you spin the analog stick in a circle too many times your character will barf.

Hold down the run button for two seconds before pressing forward to do a spin dash. Useful for ramps and reaching Golden Tin Cans.

The ending is a terrible boss fight against an enormous cyborg baby. Immediately after the fight the screen goes black and the following words appear:

To be continued in The Last Of Us 3: Look Who's Lasting Now, the thrilling finale of this planned trilogy!

XCOM: Chimera Squad
A tighter, more focused XCOM in which you make pulse-pounding choices, such as buying a new XCOM game for less than ten dollars. 9/10

Gears Tactics
Well, I can confidently say this is the best Gears of War game ever made! 6/10

Final Fantasy VII Remake
This game shouldn't be this good, and it's not, but I'm saying it is as an act of solidarity with Barrett to stick it to the corporate scumbags. 9/10

Bleeding Edge
If you can't get enough esports with wacky characters I hold you personally responsible for this oversaturated genre. 4/10