My First Week With Virtual Reality

I have wanted to own a VR headset since I paid $20 to use one for precisely five minutes as a kid in the mid-90s. Until last week I still hadn't picked up a virtual reality kit. Why?

2. I refused to buy a product made by Facebook, or through inaction allow a Facebook product to enter my home.

The Odyssey+ features OLED lenses with super high resolutions. It comes with a pair of controllers. It has accurate inside-out tracking which eliminates the need for external sensors. So why is it so cheap?

But since the Odyssey+ is hardware (really good hardware) that Steam recognizes it will continue to work perfectly fine long after Microsoft ditches the WMR platform.

The point of all that wasn't to make a sales pitch. It was to reassure myself I didn't waste my money.

Setting up is easy. There's one cord with two plugs on the end, one USB 3.0 and one HDMI. Plug them in. Install WMR for Steam beta, install the Steam VR beta. Then you're in VIRTUAL REALITY!

After loading into Steam VR's default fantasy house and familiarizing myself with the controls I took a virtual tour of the Valve office. It felt like being there. Well, the office was completely empty and some fine details and geometry had been slightly garbled by the 3D scanning process. So it felt like being there, in The Langoliers tv mini-series version of the Valve office. 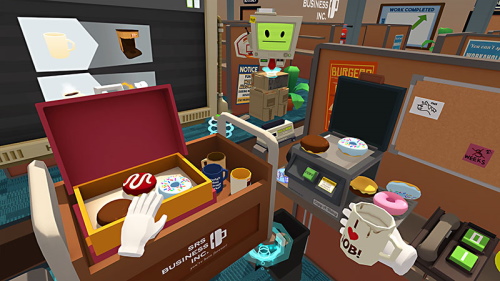 Job Simulator was the first game I tried. It let me do absolutely everything I imagined was possible in VR: Picking up random objects, holding them directly in front of my eyes to look at them closely, then throwing them. Within the first minute I had consumed a moldy donut from a garbage can, barfed virtual vomit on a computer, and photocopied my head which produced a brain (which I threw at a robot).

This alone justified the price of my headset. 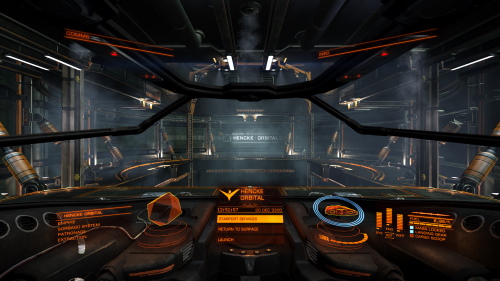 Next up was Elite Dangerous. The tutorial began with me in the cockpit of a small spaceship parked inside a space station. And I was in the cockpit of a god damn spaceship. To be clear, it didn't feel like I was playing a video game and moving the camera around with my head. It literally felt like I was there. Of course I own one of the most easily trickable brains in the world, but I couldn't believe how convincing the experience felt.

The cockpit was a physical space that stretched out around me. UI elements were panels I turned to concentrate on. As I waited for permission to take off a huge ship slowly passed overhead, and its presence was a palpable thing that overwhelmed my senses as I looked up and leaned forward in awe.

This alone also justified the price of my headset. 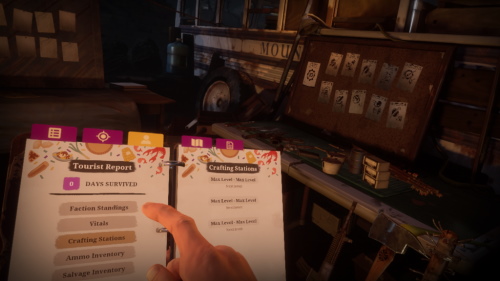 Finally, I played the opening of The Walking Dead Saints & Sinners, a Fallout-ish RPG.

I got to choose my arms. As a lifelong skinny wrist haver, I chose thick wrists in a perverse act of wish fulfillment. The game showed me how to reach up to my shoulder and grab my backpack, how to look down at my holster and draw a weapon, and how to grab a bandage then manually wrap it around my other arm (my supple, thick wristed arm) to heal.

Then came a ride on a small boat puttering through the flooded streets of post-apocalyptic New Orleans. If this sequence had been on a screen I would have passively taken it in and been impatient to get to the game. Instead I had the exact same sensation of being on a Disney World ride. I gawked the whole time, soaking up every detail as stuff happened all around me, wishing the boat would slow down so I could see more. It was the Pirates of the Caribbean ride with zombies as witnessed by a man with impressive wrists.

This alone, in addition to the other two things alone, justified the price of my headset.

All of this means we're finally going to do some VR coverage from time to time. We will, of course, have a big stupid thing about Half-Life: Alyx when it comes out, along with reviews of everything I started playing this week.

PSA FOR OTHER NEWCOMERS:

In SteamVR's video settings menu there's an entry with a name like Advanced Supersampling. Sounds like a good thing, right? Wrong. It's the worst thing. The worst thing in the entire universe.

Advanced Supersampling means "all your shit is now low resolution and blurry, all of it you idiot" and it is a setting from a garbage can.

If you would like to see the VR games you play, turn it off.