This may have been the quote of the year for me:

Not only did he release a solo album with the smallest possible whimper, but he's calling out a band that was inexplicably cool 10 years ago and hasn't done anything worth discussing since then (if ever?). I can't even figure out a worthwhile analogy for this.

I think you should send out special thanks to Celine Dion for NOT making an album in 2005, giving our ears and central nervous systems a much needed break after conspiring with Anne Geddes in 2004 to make listeners worldwide projectile vomit from C-sharp saccharine overdoses. The longer she stays away from a recording studio, the more her slide into eventual obscurity is assured, and the greater the likelihood that a happy day will come when I can again turn on my radio, silent lo these many years, without fear of being tasered into submission by the strident peals of "My Heart Will Go On".

Fuck...the only real tragedy at the end of "Titanic" is that as Jack, to my glee, sank into the icy depths of the North Atlantic, he did not grab Dion by her giraffe-like throat and pull that Innsmouth-reject down to the dark demise she so deserved. The only way I want to hear her voice again is to hear her cries for help from the bottom of a well muffled as I slide the capstone into place. As a Canadian, I apologize to the world for unleashing this shrieking horror upon them.

Worst Idea for a Song, Ever:
Vanilla Ice - Ninja Rap 2 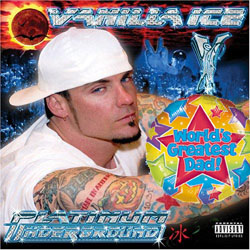 This album cover was way too busy to find a good place to stick the World's Greatest Dad logo.In case you don't know, Vanilla Ice had a new album out, which should take spots 1-23 on a "worst songs this year" list. Most of the songs should have never been thought up, but you have to give special credit to making a sequel to "Ninja Rap." For those who don't remember, "Ninja Rap" is the song Ice performs in the second Teenage Mutant Ninja Turtles movie. That song was a bad idea to begin with, further multiplying the sheer idiocy of making a sequel. And to further add to the retardedness, he decided to make it a rap-metal song. That's right, rap-metal, probably the genre with the highest retardedness quotient. In order to associate with more stupidity, V-Ice brags about how Insane Clown Posse fans like him ("JUGGALO LOVE! We sellin' every place out!").

Even if you don't find this award worthy of your award show, you need to give Vanilla Ice an award for SOMETHING, perhaps a "Worst Lifetime Achievement" award or "Most Incredibly Retarded Album." He tried killing himself but is still alive, meaning he even failed at being a failure.

The Eighties Sucked Enough the First Time Around Award:
The Bravery...

...Although it could be just about any shitty trebly guitar/hi-hat disco beat band. The truth is if this was the eighties the dudes in these bands would be beating up the 'fag' in high school in the Gang of Four shirt with the copy of Wire's 'pink flag' underneath his arm to a soundtrack of Van Halen, Journey and Camaro engines. If I hear one more down-strummed clean guitar over a 'jerky' hi-hat I am going to use voodoo to re-animate the corpse of Ian Curtis and turn that pale, skinny zombie motherfucker loose to bore every single one of those bands to death with his monotone singing voice.

Runner-up: So called 'emo' bands. It is not 1986 and you are not Rites of Spring. Please stop using the e-word for your sexist, woman hating crap-rock. All you are is nu metal hitting puberty. There's still stupid guitar moves and facial expressions, and false sincerity just destined for Livejournal, but instead of songs about parents not understanding you, it's about girls not liking you. The musical revolution is here!

I realize that this is a fairly specific category, but it still warrants an award. Rappers are notorious for saying whatever they like and having the suburban kids parroting it like a bunch of infants just learning the language, and I was all set to give this award to Still Tippin' by the ever-clever Mike Jones, who has managed to find ways to wedge his name into songs he's not even involved with.

No, the award goes to the song "Laffy Taffy" by D4L. Here we have an entire song crafted around candy without making remotely logical analogies. The chorus itself is repetition of "Shake dat laffy taffy girl", which, for anyone who has ever eaten Laffy Taffy, makes no sense at all. Shaking Laffy Taffy will make it deform and look funny, which is no state I'd like to see a girl's ass. Then our writers confuse candies with "Girls call me Jolly Rancher 'cause I stay so hard", something that Willy Wonka, the creator of the Everlasting Gobstopper, will be angered by. The travesties continue, and out of respect for these products I won't reproduce any more lyrics.

Between the lyrical quality and the production, you get the feeling the group was walking through a 7-11 and just mumbling about what they were looking at and some sneaky bastard with a microphone recorded it and ran off.

Band That Sounds Most like a Karaoke Version of Itself
The Strokes. 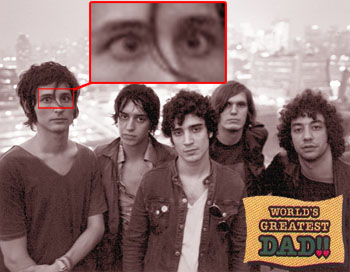 This image speaks for itself.I've always had a hatred of The Strokes and their auditory abortions, but I could never figure out why. The instrumental part of the music was good; it was catchy and generally inoffensive. The vocals were comically bad and out of place but not worthy of such seething hatred. It just plain didn't make any sense.

Then none other than Saturday Night Live gave me the answer.

While watching their laughably bad performance where the lead singer actually tried to echo himself, because apparently another band member couldn't just do the second part, I realized just why it was so bad. The music begins, it sounds pretty good, suddenly the singer opens his mouth and it sounds familiar. It sounds like a guy in his early to mid 20s at a karaoke bar, flat drunk, trying to sing his girlfriend's favorite song without really knowing what it's supposed to sound like.

So congratulations to you Strokes, your inability to find a single man who can sing even halfway decently in the entire city of New York has earned you the coveted World's Greatest Dad award for Band That Sounds Most Like A Karaoke Version Of Itself. Now take lessons.

Best and Worst Album by a Hasidic Reggae Singer:
Matisyahu- “Live at Stubbs”

I’ll hand it to the guy that he’s a pretty good reggae singer. Or is he just a pretty good reggae singer for a Hasidic Jew? This is the problem with Matisyahu, the pasty white, bearded, yarmulke-wearing singing sensation from Jamaica. Wait, he’s not from Jamaica? He grew up in rural Pennsylvania, California, and White Plains NY? Why does he sound like a cross between Bob Marley and Shabba Ranks? Well, at least his songs are catchy and colorful! What? They’re all about the Old Testament? Fuck!

Okay, all in all, he’s a good singer and the band is pretty tight (although my intuition tells me they are inspired more by Dave Matthews than actual dancehall reggae). I haven’t heard a reggae record with such crossover appeal in a long time, so he deserves credit for that achievement. But Christ is his gimmick lame! You can say “Yeah, he’s that Hasidic reggae guy!” and “He dresses like a rabbi onstage!” only so many times until you realize how fucking stupid and meaningless that is, and that there are probably very talented and original acts out there who will go nowhere because their primary audience consists of the bloated grey corpses of their malnourished brethren in their doomed Kingston ghetto.

To sum up, this is an enjoyable record for sure. But after a few listens it becomes clear that this guy is really just a new Bob Marley for the legions of rich faux-hippie Abercrombie douchenozzles who want to appear spiritual or diverse to their lame friends. JAH!

I’d like to thank all of my brilliant and attractive readers for submitting such excellent entries to the World’s Greatest Dad Awards. If you’d like to weep and wail about how your entry was way better than any of these and I’m a jerk for not printing it, please put on your favorite recording of The Star Spangled Banner, load your complaint into a rocket, and fire it into the sun. Questions, comments, and marriage proposals can be sent to davidthorpe@somethingawful.com.