2005 showed that our favorite lil' Rapper, Lil' Bow Wow still had some juice left in him. He had such hits as "Fresh Azimiz" and "Like U" with his current "boo" Ciara. This is the first big year back for Bow Wow (He took the "lil" out now that he's thug) since he's had a long hiatus after alleged molestation rumors. Although the molestation rumors have been denied by Bow Wow's clique, it's obvious his new violent lyrics are a spawn of a deeply personal sexual scar. Congrats to you, Bow Wow, for overcoming the pain of being molested by a limo driver, and putting a few hits out.

Kanye West's "Gold Digger” was actually played so often that I found it difficult to distinguish the song from other near-constant noises in my life such as traffic, crying babies, and ringing cell phones. 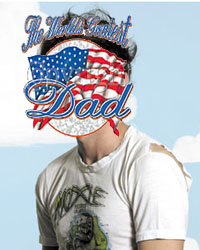 Face covered to precent exposure to extreme tweeness.If I have to watch/listen to/hear about one more elitist-prick-moron slobber all over Sufjan Stevens' "Illinois," I may just puke in disgust, adding another bodily fluid to the already miles-deep ocean of drool, semen, and probably tears that the actual "music" of the album is buried beneath. The fact is that the average person telling you about this "phenomenal" record is quoting the Pitchfork review verbatim, because the music is soft and folksy and kitschy enough to be completely inoffensive to anyone and is therefore impossible to form an actual opinion of.

Stevens employs the same sultry, patronizing whisper in each and every single track that isn't a musical interlude with an unnecessarily long title, and the accompanying instrumentation, composed mainly of banjos and wood flutes for that supreme "I'm-a-pretentious-twit-who-can-play-more-instruments-than-you-knew-existed/douchebag" feel, never attains a volume higher than that of your average lullaby. Sufjan Stevens is the kind of music that you'd play to a child in the womb if you wanted that child to grow up to be a cardigan-sporting, Volvo-driving, latte-drinking French teacher.

None of this would be so bad if I didn't have to listen to one of my chic acquaintances babble on incessantly about the "unassuming genius" of Stevens or of the "raw ambition" of Stevens' plans to write an album's worth of utterly uninteresting, overproduced twangy crap for each state in our fine union every time I turn around three to four times. Saliva should be reserved for pillowcases and paternity tests, not spent coating the mediocre-at-best efforts of the latest 20-something Indie-alt-country-CRAP artist that got a 9.0 or better on Pitchfork. For these crimes and trespasses I award Sufjan Stevens the Worlds Greatest Dad: Soggiest Album award.

Also, who does "Sufjan" think he's fooling with that fake name? I mean, seriously now. Pick one of making crappy music and lying compulsively about things like your name and frickin' stick to it.

I was in the Chinese food line at the mall listening to two 14 year olds talk about their musical transmutations ("Yeah, last year I was totally going through a punk phase, but this year I am soooo indie") when the magnitude and painful ubiquity of this beast struck me. Indie pretension has always been a bit bothersome, but whatever credibility the obscurity of shitty bands gave to it has been chopped down by an American public desperate to fill its iPods with, well, really anything, and record companies quickly taking note. Though the term 'indie' is potentially problematic because it now can refer to music of any style on any kind of label, the ethos is what defines it: a repudiation of all things commercial and a dash of self-importance. This ethos is accompanied with a hefty dose of cognitive dissonance when an indie band is on a major label.

In 2005 'indie' swelled to very un-indie proportions, to the point that tree-huggers who have diets that consist of granola and twigs, and yet inexplicably fat faces were able to become internationally recognized major-label rock stars and still be hailed as 'indie messiahs'. The whole of this new genre is personified by Ben Gibbard of the profoundly named 'Death Cab For Cutie', who looks like a bloated toad, but has by way of his success gained the rockstar self-assurance needed to sing a song about being way too majestic for someone else (Someday You Will Be Loved), when in reality he looks like he should be the one tearfully listening to emo songs about severed heart-strings and languishing over his own inadequacy.

Though Gibbard is the pope of commercial indie, 2005 also gave us an abundance of cardinals just underneath him, mostly Canadian 'collectives' and folk rock weirdoes, proving that when aspiring hipsters have vacant gigabytes on their iPods and want to showcase their musical tastes as 'esoteric', anything can be hailed as listenable. Because of it's appeal to people who are so bad at elitism that they think that listening to the Arcade Fire constitutes singularly unique listening habits, 'Commercial Indie' wins the prize for Most Annoying Genre of 2005 for inspiring idiotic preteens to become indie rock snobs.

As has been the way for the last 27 years, the Cockroach is formally awarded to any musical artist that has survived even the most brutal thrashings from the respective worlds of music criticism and listernership, only to inexplicably continue making successful albums. Past recipients of the award have included such survivalist wretches as Aerosmith, Kiss, and Madonna. This year, we would like to honor Staind, who have persevered through the headiest of critical vitriol to release "Chapter 5", very much against the collective prayers of anyone with ears (and eyes for those who die a little inside every time they see Aaron Lewis's ghastly sad-puppy visage).

Winning this award is no small accomplishment. Staind has been recognized on the basis of their universally deplorable catalog, absolute failure to improve in any discernible way, and their nothing short of miraculous downward spiral in quality. For the longest time, we at the Cockroach Institute had no idea that they could sink any lower than they did with the reprehensible tuneless prom song for the gratefully deaf that was "It's Been Awhile". However, with their new single "Right Here" they have dethroned even that slick and sewerous auditory abomination. So for these reasons, Staind joins the ranks of musicians who somehow manage to survive long after superior artists have died. 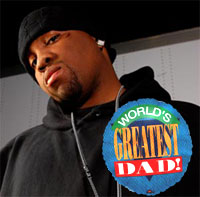 Seriously, who the heck IS this guy?I can just picture it now. You're a regular, mature black person. You go about your daily life. Then Mike Jones comes along, and you instantly understand that lame, suburban white youth have found their new gatekeeper to "black culture". Ah yes, gold teeth! Big cars! Fiscal irresponsibility! Women with robust behinds! Forced, ignorant, regional accents that are beyond transparent in their delivery! These are the things that 100% of all black people in America are all about. Feel free to stand up and yell his annoying catch phrases during your Africana Studies 201: The Black Experience in America class, the professor will love it. I mean, he's probably black!

Just make it easy on yourselves, people who enjoy Mike Jones. Save yourself the money you would have spent on his album, and just make fun of a black homeless man until he cries. That shit is free, and they're essentially the same thing.