System of a Down

Seriously, what in the Holy Ghost is wrong with you people? I stop paying attention for ten minutes, and suddenly everyone is listening to System of a Down. Do I have to get serious about this?

All I ask is that you think critically about the music you listen to. It’s not so hard. Next time you put on a record, close your eyes and ignore how cool the band’s logo would look on a t-shirt. Allow the music to be processed by the part of your brain that does your taxes (or your math homework if you’re too young to work for The Man). After a few minutes, ask yourself “is this terrible?” If you’re listening to a System of a Down record, you will either think to yourself “wait a minute, yes, this is terrible,” or you will be unable to think things to yourself because you were kicked in the head by a horse when you were a child. If the former is true, congratulations. You’ve graduated. You’re now a discriminating non-idiot, and you can fend for yourself in the big scary world of adult tastes. If the latter is true, you can probably consider yourself exempt from this article, because you’re an adorable man-child halfwit who just wants hugs.

A third option exists. Perhaps you’re steadfastly holding on to your misguided little teenage love of System of a Down. Perhaps you’re unwilling to admit that they’re terrible because you refuse to turn on the special part of each and every human brain that is biologically devoted to hating System of a Down. Be not afraid, child, I can fix you. It’s my job. There are plenty of low-wattage individuals who never realize how offensively stupid their favorite band is until some hero like me comes along and snaps them out of it.

I never thought I’d have to worry about System of a Down. Hard rock fans, I thought, don’t usually bother spending their money on children’s novelty records. But I admit it, I was wrong. I overestimated the mental faculties of hard rock fans, which is a dangerous thing to do. Hard rock fans have never been the deepest thinkers (getting stoned and going “what if this is all… like… what if we’re all, like, inside a huge… uh...” doesn’t count). However, I figured that since Tool was so popular, rockers had come to expect at least a veneer of fake intelligence tacked onto a solid core of dumb. System of a Down has a thin, watery varnish of fake smarts smeared sparsely over a huge, majestic blimp of dumb.

If you’re a dim and misguided teenager who hates his parents, you could reasonably mistake Tool’s lyrics for deep. Once you turn sixteen and start noticing girls, of course, you’ll go “what the fuck have I been listening to?” and buy some grown-up albums. Mistaking System of a Down lyrics for deep, which thousands of feckless, virginal Hot Topic pantywaists do every day, requires a level of confusion so severe and overriding that I’m surprised they even manage to drop out of high school properly (I’d think they’d fuck up dropping out so bad that they’d wind up with a Master’s Degree).

This May, System of a Down released Mezmerize, an album so misguided that even the spelling was bungled. The rock and roll press, fresh from lowering their standards to accommodate Green Day’s moronic record into the increasingly meaningless canon, failed to laugh at Mezmerize’s clumsy political posturing. Spin magazine, for example, labeled Serj Tankian an “agitprop trickster,” which both gives Tankian way too much credit and makes Spin look like schoolboy douches for using the word “agitprop” in a rock review. 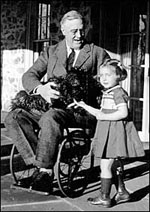 Why don't presidents fight the war? Because Roosevelt was in a wheelchair, you ASSHOLES!If Green Day’s vile American Idiot built political commentary out of Lego, Mezmerize snaps it together out of Duplo (you know, that double-sized unswallowable Lego for toddlers and retarded kids). The album’s first single, B.Y.O.B., is the kind of scathing indictment of the military industrial complex that’s usually reserved for lofty literary media like bumper stickers and picket signs. Yes, we know the war is bullshit. Everyone knows the war is bullshit, even the rednecks and Republicans that pretend it isn’t bullshit. We all love to make fun of conservative politicians for speaking in platitudes, but how about lyrics like “why don’t presidents fight the war / why do they always send the poor”? Wow, slam-dunk. Now do the one about the Air Force holding a bake sale. What’s worse, the video for the song centers on the most insipid of egotistical metal clichés: the band playing to a bunch of invigorated youths as fascist police try to smash up their concert. Sorry, morons, your jackboot martyrdom is not forthcoming. You have to be hurtful to the system before you get squelched, and as it stands, you’re still funneling money to Republicans (more on that later).

B.Y.O.B. is dumb, but the rest of the album doesn’t fare much better. “Radio/Video” is The Replacements’ “Seen Your Video,” a mere twenty years too late. This song, along with “Violent Pornography,” really illustrates System of a Down’s distaste for mainstream pop culture, to the extent that impressionable young listeners might forget that System of a Down are turning the exact same tricks as any other whores on Earth. Listen to this, teenager: The Sony Corporation is just shilling System of a Down’s rebellion to extract money from the demographic who doesn’t buy Destiny’s Child records (both artists are beholden to Sony’s Columbia Records). Regardless of System of a Down’s clumsy political posturing, they are an integral part of the system of extracting money from stupid teenagers (you) and giving it to old, rich white Republicans. Am I one of those awful idiots who hates all major-label music because of this? No, of course not, those guys are complete pussies. I just like pointing it out to youth-addled stoners who think they’re supporting something alternative. For example, a member of System of a Down’s official forums writes:

im really into the political side of the music aswell even tho i havnt been to a campaign of this scale before i though some of u might like to know sooo here's a link http://www.anticapitalism.org.uk/index.html there's a campaign in 2 weeks to do with war,poverty,hurricane katrina,g.bush and how is actions are going to effect the world, and many more subjects that i found quite intresting the campign is on the 24th in london if you want to know more go to http://www.socialistparty.org.uk/2005/406/np12.htm i know most of you dont really care but if u do then you really should take a loook. hope to see some of u there and thanks for reading.
daniyelle

The Sony Corporation of America welcomes your anti-capitalist dollars, Daniyelle. System of a Down may have had a CD called “Steal This Record,” but I’ll bet you ten bucks they had to fight tooth and nail to clear it with some grey-haired asshole who was worried that idiot fans would take it too seriously.

System of a Down’s “political” lyrics are trite and hollow, to be sure. But to their credit, many of their lyrics aren’t political, they’re just stupid. Elsewhere on the album we have “Cigaro,” a song about the phallocentric aggression of world leaders and their Freudian love of cigars. Well, I suppose you could call it that, or you could cut the community college bullshit and admit it’s just a terrible song about dicks. Demonstrative lyric:

My cock is much bigger than yours,
My cock can walk right through the door
With a feeling so pure..
It's got you screaming back for more

They have all the rhyming skills of a middle-aged schoolteacher from Nebraska trying to show his students he’s “with it” by busting out a funky-fresh rap. Oh, but they said “cock,” so I guess they’re as edgy as a giggling fourth grader. I don’t know who’s stupider, someone who writes those lyrics, or someone who listens to them and says “this is great!.” Wait, yes I do, it’s the person who listens to them. Those lyrics have gone far beyond the point of being justifiable with a claim that they’re tongue-in-cheek. They’re not tongue-in-cheek, they’re finger-in-nose. Period. And did I already tell you that you’re stupid if you like them? Okay, I guess I did. 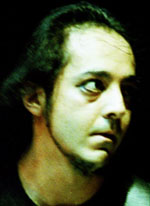 This guy needs to stop trying to sing.It seems that I’ve said quite a bit about the lyrics but haven’t addressed the music. I could come up with all sorts of flowery ways to say that it’s annoying and disjointed, but that would be dignifying their pathetic efforts to be weirdy-beardy. For all their abrupt changes in tempo and intensity, the band succeeds only in insulting the intelligence of the audience by assuming listeners will be dazzled with cheap antics. To add injury to insult, the vocal duties on Mezmerize are shared between irritating but capable singer Serj Tankian and irritating but extremely incapable whiner/screamer Daron Malakian. Malakian taking over more vocal duties speaks not of intra-band conflict, but of a disgusting lack of intra-band conflict. Why won’t anyone tell the guy he can’t sing? They need to sit him down and say “sorry, you sound like a twelve-year-old diabetic with bad insulin regulation. Sit this one out and let the singer sing or we’re going to be even shittier than we were before, if that’s even possible.” I was probably a little too charitable in affording them the lucidity to realize that they suck, though. They probably think they’re great, which is funny to me.

If you’re the sort of idiot who listens to System of a Down and would like to tell me I’m wrong about any of this, which I’m not, you can e-mail me at davidthorpe@somethingawful.com. However, I will set my mail filters to delete any System of a Down-related messages unless the subject line reads “E-MAIL FROM A RETARD, PLEASE IGNORE.”