Weezing to a Halt

Weezer, according to frontman Rivers Cuomo, is “done.” One wonders why they didn’t notice that three albums ago. Shall we have a career retrospective, then? Smashing! 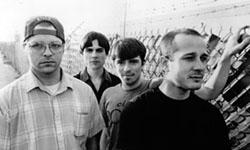 Weezer, as they were. It’s understandable— if not excusable— that kids of my era, mid-twenties kids reared on MTV, still look back on the first two Weezer albums with misty eyes. Weezer was easy music in a difficult era, a perfect starting point for a twelve-year-old just starting to notice music. Amid the turbulence and suicide, Weezer was a calculated effort to rehash and modernize the simpler pleasures of The Cars and Cheap Trick. They had quirky lyrics, silly videos, and an indie façade tacked to a major-label budget.

It’s easy to see, in retrospect, that Weezer was a money-grub from day one: fake-indie, custom-stitched by Geffen to attract those youngsters who weren’t quite canny enough to recognize authenticity. It only takes one glance at a video like Buddy Holly or one spin of a track like El Scorcho to recognize that Weezer was merely Pavement with training wheels. They had the ironic arena-rock pretensions of Dinosaur Jr. without the drilling fuzz (although, as we’ve seen in recent years, Weezer’s arena aspirations weren’t so “ironic” after all), the nerdy girl-trouble lyrics of Sebadoh without the tape hiss, and, most obviously, the referential slacker-chic of Pavement without the brains. It was phony. It was Kidz Bop: Indie Rock Edition.

Of course, it takes a miserable cynic to assert that there’s anything wrong with callously assimilating “hip” influences and recycling them as mass-market, double-platinum pabulum; it’s been the bread and butter of the music industry since there’s been a music industry. However, as you all certainly know by now, I am a miserable cynic. If the abysmal “Green Album,” “Maladroit” and “Make Believe” didn’t already cause you to reevaluate your opinion of Weezer, now is the time to start.

Many of you, despite having grown up, still revere the “Blue Album.” Look back over it with a critical eye, and lay your fond associations with puberty aside: you loved the album when you were twelve because it’s written for twelve-year-olds. It was a non-threatening invitation to the big-kid clubhouse. That’s not a metaphor, that’s specific: listen to “In The Garage” (pronounced “grodge”) if you don’t believe me. The cool big brother vibe of the album is meticulously constructed and impossible to deny, albeit by means of some of the worst lyrics ever commercially released: 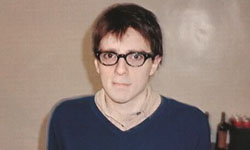 Rivers Cuomo: The Emo Woody Allen Pinkerton, now retroactively canonized as a rock classic by lazy critics, was little more than a slapped-together sophomore slump given longevity by the mere fact that it appealed to the lowest common denominator of pubescent male emotion. In fact, Pinkerton represents a landmark in the current mass-media perception of “emo”: while bearing little resemblance to actual emo music, Pinkerton was so acutely pathetic that it managed to practically redefine the term, helping to usher in the era of emo as “pop-punk + whining” that we enjoy so well today. The indelible image of a shy, cardigan-clad and thick-rimmed Cuomo is the template for a million Myspace photos.

Rivers Cuomo, in effect, is one of the main reasons your little brother is such a queer.

Rolling Stone’s original two-and-a-half-star review of Pinkerton had it pegged: some catchy tunes, boundless clichéd “why doesn’t she like me” lyrics, and not a lot of substance. The fact that this review was later amended to five stars speaks more of Rolling Stone’s total lack of critical integrity than for any meaningful reevaluation of Weezer’s work; at the merest hint that the winds of public opinion blew in a more Pinkerton-friendly direction, Rolling Stone caved in to popular consensus (as they so often do). Pinkerton is, just as it always has been, a shabby, juvenile, two-dimensional record. The naked emotional honesty of a grown man with the stunted emotions of a sadsack teenager is about as compelling as that picture Calvin drew of a polar bear blinking in a snowstorm.

And shoddy as these albums were, they’re Revolver and Sergeant Pepper’s compared to what would follow.

Disappointed by the relative commercial failure of Pinkerton and admittedly embarrassed by its lyrics, Cuomo nudged the band into a half-decade hiatus, during which Rivers Cuomo went to Harvard and bassist Matt Sharp quit the band to form the obnoxiously tongue-in-cheek Rentals. After years of internet fan-clamoring, Weezer returned in 2001 with the undeniably reprehensible Green Album, a plodding half-hour of dimestore tunes and audacious musical laziness. 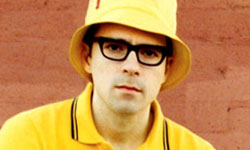 Did you just fall out of a New Radicals video? Every single song on the Green Album follows the same structure; most appallingly, each and every song features an interlude during which the vocal melody is played, unembellished, on an electric guitar. Perhaps these interludes were merely placeholders where guitar solos were supposed to go, but Rivers forgot to go back in and redo them. Perhaps he was simply too lazy to expend even the most modest additional energy on his already sparse songwriting. As it stands, however, they make the record sound like little more than an insult to any fan foolish enough to expect Weezer to put any effort whatsoever into their comeback.

Having left behind the hypersensitive lyrics of Pinkerton and the quirks of their debut, the Green Album marked Weezer’s abandonment of any vestige of “alternative” image; though they rankled MTV censors with a song called “Hash Pipe” about a transsexual prostitute, they miraculously managed to refit themselves as a cutesy teenybopper band, partially on the strength of the “Island in the Sun” single, a massive international hit that featured prominently in Mary Kate and Ashley Olsen’s cinematic masterpiece “Holiday in the Sun.”

Although their next album, Maladroit, fared slightly better on the musical side, its complete lack of compelling material— or even decent singles— confirmed that the dismal Green Album wasn’t merely a fluke. Weezer had lost it, if indeed they ever had it, and it wasn’t coming back. The slight, empty “Dope Nose” managed strong radio airplay but was so scant on hooks that it barely registered in the brain. After hearing it once or twice, it could slip by completely undetected; I’m sure reports of UFO activity skyrocketed following its release, with radio listeners experiencing “lost time” during their drives. “I don’t know what happened,” they might say. “One minute the DJ was announcing the new Weezer single, and next thing I knew, it was three minutes later and I had no recollection of anything happening.” 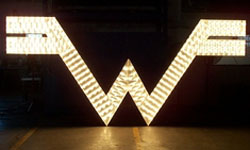 Weezer's arena-rock pretensions catch up to them. “Keep Fishin’,” with its adorable Muppet video, was Maladroit’s stab at an “Island in the Sun,” a cute throwaway for the “tween” market (doesn’t that word sound dirty? It always makes me think of “t’aint”). Full of awkward transitions and sloppy wordplay, it was perhaps the most unmitigated artistic failure yet in Weezer’s catalogue of singles. But lackluster as it was, nothing could prepare the world for how patently offensive Weezer could still become.

News of Weezer’s breakup didn’t surprise me much. It was between the lines as soon as “Beverly Hills” hit the radio, and it was writ large on the wall at the moment “We Are All on Drugs,” one of the worst rock singles of all time, limped sheepishly onto the airwaves. With their (hopefully) final album, Make Believe, Weezer finally managed to embarrass themselves clean out of existence. Make Believe, produced by contemptible schlocksmith Rick Rubin, is a shameful, detestable affair. The singles were prodigiously bad. “Beverly Hills,” even by the standards of the most ruthlessly commercial band, would be a sell-out. “Beverly Hills” would be a sell-out if the goddamn Pussycat Dolls released it. It’s a piece of merchandise. It’s a fucking Tickle Me Elmo. “Perfect Situation” sounds like the sort of song the All-American Rejects would have written circa 1992. “But Dave,” you might object, “the All-American Rejects would have been like eight years old in 1992.” Exactly.

Though I faulted the guitar interludes on the Green Album for being overly simplistic to the point of absurdity, the guitar solos on Make Believe are needlessly ornate and corny beyond belief; the vocoded Frampton antics on “Beverly Hills” sound like Donald Duck imitating Hendrix with a kazoo, and the solo in “Perfect Situation” sounds like it’s ripped clean from a Skid Row monster ballad. Worse yet is “This is Such a Pity,” which sounds for all the world like a Don Henley b-side, with a high-octane dual guitar blowout that could have trickled straight out of Glenn Frey’s urethra.

A musical and lyrical abomination, “Make Believe” has placed Weezer high among the ranks of the most irrelevant corporate rock machines in existence. Hopefully it was some sense of human decency, maybe even some remaining shred of pride, that caused Rivers Cuomo to dissolve the band at both the height of their commercial success and the terminal abyss of their artistic achievement. Perhaps he’ll go the route of former bassist Matt Sharp, who released a low-profile, sad-bastard album in 2004. Perhaps he’ll continue his bizarre quest for new-age quasi-spiritual bullshit self-betterment and release Moonie motivational albums. Maybe, just maybe— maybe if we’re all good little boys and girls and wish really, really hard— he’ll just fade politely away.

If you have any questions or comments about your own pathetic and illogical devotion to Weezer, you can e-mail me at davidthorpe@somethingawful.com, and I will mail your letters to Rivers Cuomo so he can throw them in his fireplace and burn the love of his fans to ashes for his own amusement.