How to Properly Enjoy World of Warcraft 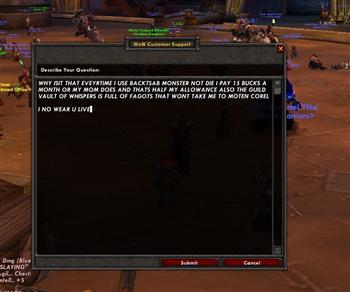 Create a good group. Most of the expert, advanced content relies on being in a balanced group of 5 or more people. A balanced group should consist of a Hunter, Three Rogues and a “Utility” player, such as a healer or a Tank. The best way to go about creating a group for an instance is “/y LFG 4M full on rogues no fags no girls PST”. Go ahead and bind this to a macro so you don’t have to type it out every 15 seconds.

When someone is advertising they are “looking for one more, healer only” be sure to tell them to invite your Rogue – you’ve got First Aid at 220 so everyone’s good to go (provided they give you Mageweave Cloth). Also when joining a group for an instance, be sure to be queued for Battlegrounds and have as many prior obligations as you can before starting the instance, that way if you get bored you have other things to do. It’s just a game – everyone will understand when you go AFK unannounced for 15 minutes to go smoke.

When in a group, roll on everything! WoW, much like Diablo 2, is about collecting as many items as possible. Just because you can’t use it is shouldn’t stop you from rolling on that plate helm – a patch could later give the ability for Mages to wear it! Being an Enchanter (or even remotely considering reskilling for it) means rolling on each Rare item that drops is like picking herbs for an Herbalist. The concept of “Need” and “Greed” rolls is vague: if your character NEEDS gold, roll on the Bind on Pickup Warrior-only .0002% drop rate Axe of Doesn’t Fucking Drop – its 5 gold to a vendor. People that roll greed on trash drops are just failing to realize how expensive Epic Mounts are.

If you are set as the master looter, be sure to only let rolls for items occur during intense combat, in a five second window to ensure you are only rolling to yourself. If you are not the master looter, the first time you lose a roll on an uncommon drop quit the group, pull a ton of monsters, leave the instance then spend the next hour in Ogrimmar yelling in detail how the “fagots” unfairly “ninja’d” the item from you. Then report them.

Be sure to announce everything you do with macros. Communication is the most important thing in your relationships with the group. Casting Flash Heal is one thing. Try setting up this beauty though:

“SoonToBeDead, who is a Level 48 Female Undead Warrior, is now at 100% Health because of Shadowshade’s Flash Heal”

“Thanks me, Shadowshade, for that Awesome Flash Heal on SoonToBeDead, the Level 48 Female Undead Warrior” 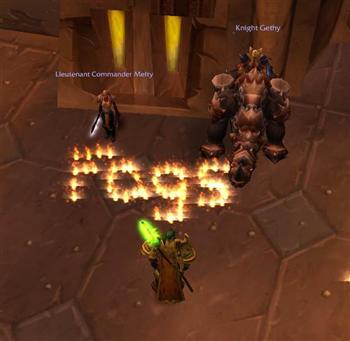 Also in Patch 1.9, Trolls will be introduced as a playable race.

This helps gets the point across that you are getting the job done (and that newbie SoonToBeDead keeps taking damage... REPORTED). Other good abilities to set up a party alert macro like this are Sinister Strike, Sunder Armor, Fireball, Shadowbolt and Detect Minerals. Because of the importance announce these alerts in /y; its much easier for players to read loud red text.

Treat Getting Aggro Like a Competition. Combat isn’t any fun unless the mob is fighting you back, so be sure to do as much damage as possible. Those damage and heal charts you post in the raidchat after/during every pull are the only accurate gauge of skill, and you need to be the absolute best. Area of effect damage is the easiest way to prove you are number one, and I’m sure the priest will understand that.

Getting aggro is easy too: convince that warrior he’s not doing his job properly with Presence of Mind, Pyroblast, Flameblast, and Cone of Colding the target right after he charges it. Two tanks in the group? Go ahead and let them fight it out on the same monster, and deal with the other three elites when the first one is dead. Energy spent on Feint is energy you are not Backstabbing with, and you can dodge 20% of attacks headed at you anyways.

Crowd Control is for Pussies. You are a busy player: you’ve got loot to ninja, lvl 10s to grief, and there’s some asshole selling an item you want in the AH for too much that needs to be reported. Needless to say, you don’t have time for this sap/sheep bullshit. If Blizzard thought you couldn’t handle the 7 Elite Dragonkins at the same time, they wouldn’t have put it in the game. Ignore the concerns of your party members, claiming that its faster to spend 15 seconds casting Shackles on a Zombie then it is to spend 15 minutes walking back from the Graveyard to Blackrock Mountain –- the /follow player command works even in death. 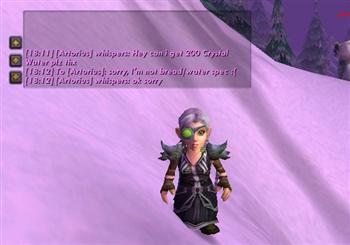 Never accept fault for anything. Some say that accepting the fact that you can make mistakes is a sign of maturity. Well, the second you hit level 20 is the day you became a real mature man - and men don’t make mistakes. Fortunately for you, there are PLENTY of things you can blame the fourth wipe they think you’ve caused.

Well, that should summarize everything. I want to give special thanks to Malkith, Caselogic, Adam Kensai, Raivin, and all those chowderheads in the forums. If you have any questions, ideas, hate mail or are looking for a real attractive female to talk about BWL strategy for affordable rates contact me at abraham@somethingawful.com. I'm sure we can work out something that's mutually beneficial for the both of us.

More The Art of Warcraft Next