Grom Social (Thanks, Stevo the Human!)

Just as toddlers need tablets if they're going to be ready for the challenges of techno-tomorrow, preteens absolutely must have their own social networking sites. And despite its awful name, Grom Social is poised to corner the market on 16-and-under users interacting with online "friends." Move over yet again, Facebook!

According to its cloying origin story, Grom Social started a few years ago when Zach Marks' meddling dad kicked the plucky 11-year-old off Facebook - twice - for lying about his age and attracting hundreds of pedophiles (at least that's the implication I'm getting from this article). Now, the site has signed up 100,000 users, wrangled a partnership of some sort with MTV, and garnered breathless accolades from the media. Not bad for a kid! It just goes to show you, all you need to become the next Mark Zuckerberg is a good idea. Oh, and a bunch of your rich dad's rich friends to actually build the site and invest money in it. Look, they've even nabbed Doom creator John Romero as an advisor! Maybe he can fix the games section, which currently just features terrible Flash rip-offs of Mario games. 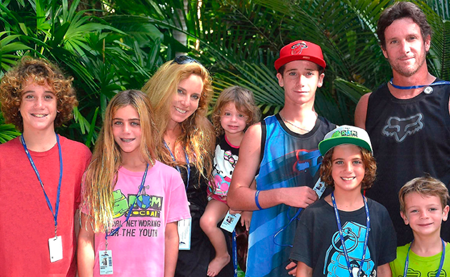 Just gromming it up at the Grom Pound, my groms!

A lot of the content featured on Grom Social centers around Zach and his large, photogenic family, which looks and sounds like it emerged straight from the set of a Disney Channel Original Movie:

All members of the family are represented as Gromatars on Grom Social. Each character personifies his or her real life pursuits and adventures. The Grom Pound is home base for the Marks family. Set beside the Indian River Lagoon along Florida's Space Coast, the Grom Pound encompasses the Grom Social office headquarters, a motocross track, a six-foot half pipe, a quarter pipe, pool and trampoline. The Grom Pound is located down the street from the world-famous surf break, Sebastian Inlet, (breeding ground for 11X World Champion Kelly Slater). This locale provides endless recreational and educational stories for weekly Grom Spots, as does the active lifestyle of the Marks family and their passion for adventure.

Apparently, "active lifestyle" and "passion for adventure" translate to "zany wealth-flaunting outings." The latest "Grom Spot" features mindnumbingly dull footage of the Marks family hitting up all the toy stores in New York City, as if anyone gives a grom.

With all the money and people involved in this gromheap, it's a shame they couldn't hire a competent artist. Jesus, just look at Zach's deformed cartoon doppelganger on the front page. What the hell is going on with his sleeves? Why are his ears all lopsided? I guess the artist just completely gave up on his left hand. Also, what happened to Ashley's teeth? Just think, there are people in suits who looked at these awful drawings and thought "yes, I will invest money in this venture."