As far I can tell, Ministers-Best-Friend is a clearinghouse for all the crazy Christian/right-wing linkbait your least favorite relatives share on Facebook. The site is a grotesque cacophony of different colors and marquee text. It looks like a ransom note from the Timecube guy. Every page repeats the same mountains of word garbage, sometimes multiple times, so you'll have to do a lot of scrolling to find whatever content you actually wanted to see. Sometimes the content is directly on top of other content, which makes for a fun reading experience.

Despite these glaring design flaws, Ministers-Best-Friend has the chutzpah to include a page on website building, because they're clearly experts in the field. In fact, they've applied to the Guinness Book of World Records "For the 'Most Webpages Ranked Ranked No-1 on Google!'" Good luck, guys!

Ministers-Best-Friend is run by something called the Cambridge Theological Seminary, which claims to be the "World's Largest Conservative Bible Seminiary" with more than 6 million members. Don't let the name fool you: A disclaimer states "Cambridge Theological Seminary USA & INTERNATIONAL has no connection or relationship to Cambridge University in England." However, that doesn't stop them from trying to sell you a fake Cambridge degree, as it's "STILL...The GREATEST Name in Education!"

The site has pretensions of being an academic resource for concerned Christian patriots. Perhaps you are familiar with the famous Internet encyclopedia Wikipedia? Well, it turns out it's "the most dangerous" encyclopedia due to its "ATHEIST, ANTI-CHRISTIAN, ANTI-BIBLE" philosophy and "TRIPLE XXX-RATED" content. For a more objective source of information, Ministers-Best-Friend helpfully recommends you use a full set of its own trademarked Christian encylopedias: Ameripedia, Biblipedia, Christipedia, Catholapedia, Histipedia, Islamipedia, Judaeopedia, Medipedia, Musicpedia, Politipedia, Preacherpedia, and Scriptipedia, among others. Wow, so much more convenient!

There seems to be a Christipedia article for just about everyone in the news, as evidenced by the hundreds of thumbnails on every page. The article for American hero Tim Tebow describes him as "Super-Athlete! Super-Guy! Super-Saint!" The one on Rachel Maddow notes she "is becomeing the best-known lesbian voice in the USA, . . . . . . as Rosie O"Donnell's Star has dimmed, her show cancelled, and Ellen content to 'spoof' and 'goof-off!'" (It also weirdly notes she was born on "National Atheist Day," as if she had any choice in the matter). These are the types of high-quality, unbiased articles you just won't find on Wikipedia, or should I say Wicked-pedia.

Ameripedia's dossier on Barack Obama is similarly impartial. "What's Next for Obama: "GRAND AYATOLLAH" of 57 Muslim Nations?" really sets the tone for the rest of the page. Apparently they've amassed 250 files that expose the true nature of this Muslim traitor, but unfortunately it looks like they forgot to make them into links:

Patriotism is a major concern for Ministers-Best-Friend, which is filled with links to pseudo-scholarly articles with thought-provoking attention-grabbing headlines like "WAS JESUS PATRIOTIC?" and "Is Patriotism SINFUL?" As it turns out, "One of the main reason the modern USA is such an immoral, blaspheming mess, is that American (and western European) Christians are NOT patriotic as they should be!" When in doubt, buy more flags. 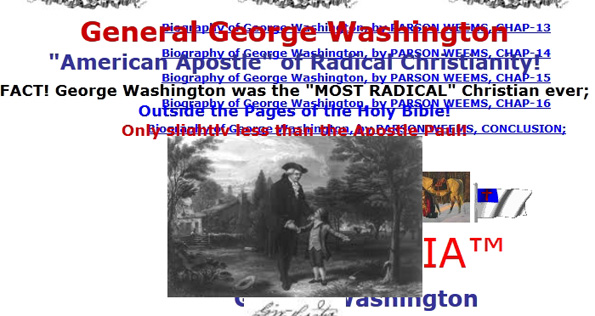 There's also an article proving beyond a doubt that George Washington, a slaveowner from more than two hundred years ago, was not a fan of the homosexuals. If I had to venture a guess, I'd say that article exists so bigots can boast that they're on the same side as Washington the next time they march through Chick-fil-A to protest gay rights or demand the Duck Dynasty guy's release from PC Prison. What, are you saying you're against George Washington? Some patriot you are.