Tuesday, Dec 25, 2007 by Caylen "Abraham" Burroughs
Know of an awful site? Send it to us and become a hero!

Jack Malebranche would be a proud satanic homosexual, if the rest of you gays would stop queering up the entire homosexuality thing for him. He's tired of your sexual freedom, your personal identity, and the way you choose to carry yourself as an individual. Jack Malebranche wants you to Rambo up, be a man, and have sex with dudes without acting like a total girl about it. You know how we consider the archetypal homophobe to overcompensate for his own curiosities?

A faghag is a creature who preys on the homosexual male, a slithering asexual succubus who stalks him and ingratiates herself to him by offering favors, a little trite banter, a generous slathering of fervent compliments, and nearly maternal (though never judgmental) expressions of devotion.

I guess he just wants dudes to grunt like Tim Allen more while performing sodomy; maybe even throw in a few high fives and crush a beer can on the back of the bottom's head. It's a real shame that a guy with a name that any male prostitute would kill for can't accept the way that some dudes choose to love and buttlove other dudes. With all that testosterone & contempt he'd probably make a great tough guy for the Gay Mafia. Still, he's a published author, a priest in the Church of Satan, and I think he's probably going to be the first homosexual to perform a hate crime.
The word faggot tidily sums up the old stereotype of the homosexual male, it identifies a myriad of negative behaviors and character flaws unfairly attributed to perfectly decent cocksuckers everywhere. (Though plenty of them still go out of their way to earn it.)

I say reclaim it.

He also does oil paintings on commission, specializing in homo-erotic mass murderers (like the Nazis, and Emperor Palpatine) with totally flamboyant facial hair. 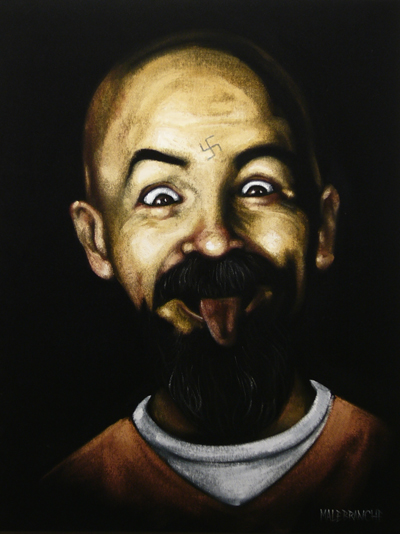