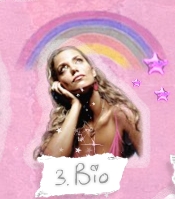 Elizabeth Berkley's name conjures two tragicomic performances: Her tearful rendition of "I'm So Excited" as a spastic uppers-popping teen on Saved by the Bell, and her harpooned-dolphin thrashings during swimming-pool sex in Showgirls. Those aren't the scenes anyone wants comprising their video eulogies, and her more recent roles in films like Student Seduction and Meet Market haven't exactly classed up her filmography. To her credit, Berkley has sought redemption through philanthropy, launching a Web site through which she counsels teen girls. It's helped heighten her profile (Ask-Elizabeth is getting its own MTV reality show), but Berkley's intentions seem pure. However, her presentation overdoes the girliness by a factor of at least six digits.

Clicking anywhere at Ask-Elizabeth results in a barrage of hearts, fairies and rainbows. It's as if a Disney villain devoured everything it opposed, then vomited on the screen. Even footage of a young woman describing how she dealt with her mother's death comes wrapped in cutesy movie theater graphics. The site provides such a potent dose of estrogen that male browsers might develop female secondary sex characteristics. The girls in Berkley's workshop videos dress normally, so it's unclear to whom this design allegedly appeals, but these mentees should probably add "decorations and general aesthetics" to "selecting movie roles" to their list of "topics about which not to ask Elizabeth for advice." 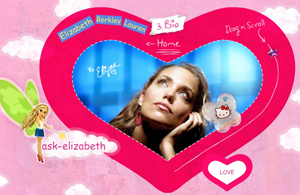