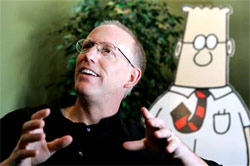 Show a man a blog and he can read for an hour, give a man a blog and he'll unwittingly expose his contemptible opinions. So it goes for Scott Adams, the creator of Dilbert, that bland newspaper comic about office workers someone might have occasionally mistaken as funny during a 1990s bowel movement.

On March 7th Adams blogged a piece entitled "Men's Rights." It's a stinker. You can read the whole thing at any one of many sites that have mirrored it. Rants about men's rights are a popular subject matter on the Internet and Adams runs through the usual hollow list of non-complaints (men's behavior is frowned upon while women's behavior is celebrated) trotted out by the adult babies in the Men's Rights "movement."

Adams then jeers at men to quit being "pussies" and explains why men should suffer their second-class status:

The reality is that women are treated differently by society for exactly the same reason that children and the mentally handicapped are treated differently. It's just easier this way for everyone. You don't argue with a four-year old about why he shouldn't eat candy for dinner. You don't punch a mentally handicapped guy even if he punches you first. And you don't argue when a women tells you she's only making 80 cents to your dollar. It's the path of least resistance. You save your energy for more important battles.

This hanging fluorescent light box (seriously) is actual Dilbert branded merch.Almost everything in the article is bad, at best just an ignorant refusal to acknowledge the historic discrimination of women, but this is the outtake that has drawn the most outrage. It has earned the ire of feminists, liberals, and all the other cretins on the Internet who aren't in Adams usual audience of aging IT professionals and people who just walked out of a bunker they've been hiding in since 1953. Jeez, who could be upset that Mr. Dilbert called women a bunch of retarded babies?

One of his posts from a feminist blog was caught by Laura Hudson over at Comics Alliance: 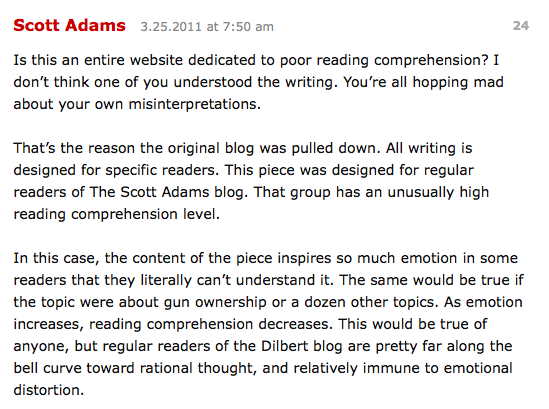 Based on the mounting evidence, Adams' concept of women is a mentally handicapped child who whines about everything, is prone to irrational tantrums, and society forces Adams to open doors for them, which he'll keep quiet about because he doesn't want to argue with them. But the story of Dilbert's downfall doesn't end here, because Scott Adams still had one last trick up his sleeve to combat the tizzies of all these stupid broads.