EXPECTATIONS: I am a Cars apologist. No, you know what, I'm not, because "apologist" implies that there's something to be ashamed of. I was a fan of the first Cars, even though it wasn't a great movie. It was a polarizing experience for many because of how different it is from the rest of the Pixar canon, but it fulfilled what it set out to do. Just like The Incredibles is a better movie for comic book fans, Cars is a better movie for gearheads and connoisseurs of automotive culture. It doesn't have the mass appeal of Toy Story or Finding Nemo, but that doesn't make it a bad movie. In general, having Larry the Cable Guy do anything makes it a bad movie, but not this time. In short, my response to these arguments has always been "You're right! Celebrity voices and merchandising DO make a terrible film! Now let's go worship the movie where Tom Hanks is a talking toy!"

REALITY: Do you hear that galloping noise? It's my high horse. Now that I've gotten off of it, it's run away.

Monocles are the embodiment of whimsy.Say what you will about the billions of dollars in Cars merchandise sold to small children who call every red car in the world "Lightning McQueen," Cars 2 is more than just the quick-buck cash grab the internet decided it was months ago. (These are the same children who decided that every fish is Nemo. Kids are retarded.) For one man at least, director and Pixar/Disney animation head John Lasseter, this isn't about the money, it's about a world that he created that he truly loves. (And it's a little bit for the money)


Cars 2 follows Lightning McQueen (Owen Wilson) and his friend Mater (Daniel Lawrence Whitney) as they travel around the world so Lightning can compete in a series of races organized by oil magnate-turned-environmentalist Sir Miles Axelrod (Eddie Izzard), the car version of Richard Branson. Along the way, Mater is mistaken for an American spy by British Intelligence Agents Finn McMissile (Michael Caine) and Holly Shiftwell (Emily Mortimer). Yes, that's right. Cars 2 is a James Bond-esque spy movie complete with ridiculous "reverse the polarity" moments. Personally, I love this concept, because it's as though Pixar realized how completely insane the Cars universe is, and decided to just go all-out with that level of craziness. Unfortunately, it makes the Grand Prix storyline seem a little contrived, as though Lasseter just wanted to make a Cars spy movie but had to get the characters from the first movie in there somewhere. There's also a bizarre subtext about Big Oil shutting down renewable energy that gets even weirder when it's done by talking cars. I chose to ignore it, because for 80% of its running time, the movie does too.

You may have imagined having a car with missile launchers on it, now imagine BEING that car!A lot of fuss has been made about the focus being shifted to the polarizing character Mater, but that's not really the case. The focus has been shifted to the exploding spy-action sequences, and Mater is the easiest character to tell that story with. Lightning McQueen is hardly in the film at all, which is fine, because he's actually the blandest character in the Cars universe. I found myself missing the interactions and personalities of all the characters from the first film, but after the opening sequences, I was caught up in the spectacle. During the spy bits, Cars 2 is kinetic, frenzied, and fun without ever feeling like the movie is just throwing explosions at you. Cars 2 is what people who defend Speed Racer claim Speed Racer is. In fact, it may be a bit more hard-core than Speed Racer, because there are no parachutes for random casualties. Finn McMissile straight-up kills some flunkies, and I found that very interesting. It shows that this is a spy movie and a comedy before it's a kids movie, and a pretty good little spy movie at that.

There's something kind of brilliant about putting Mater in a fish-out-of-water situation. What this means is that you have the character voiced by Larry the Cable Guy whose entire story arc plays around the fact that he's the Ugly American. I was a little concerned by this at first, but at no point in time is Mater ever dismissive of other cultures. He just doesn't understand certain things, and no one ever takes the time to explain them to him. It adds a sweet aspect to the character, as though he's trying his hardest to learn about the world around him and keeps messing up. There's probably a commentary to be made here on America's perception in a global society, but that's much less entertaining than Cars With Guns, so the film keeps its focus on that. 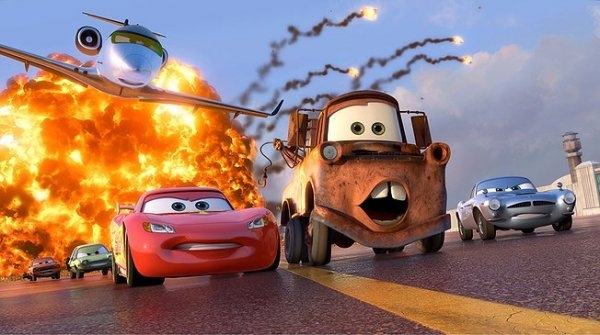 You look pretty smug for someone who's getting shot at.

At the beginning of Toy Story 3, we get to take a look into the universe that Andy's imagination creates when he plays with his toys, where all the scenarios that he comes up with are real, playing out like an adventure story on the big screen. All of Cars 2 is kind of like that. It's ridiculous and over-the-top, but in a good way. I won't pretend that Cars 2 isn't superficial (it is) or that it has any of the emotional impact of Up, Wall-e, or Toy Story (it doesn't), but that's kind of the point. The entire movie is about having fun in this bizarre world. If it helps, you can think of it as Pixar Lite: All the imagination, none of the sentimental impact. I'm pretty sure if we were to zoom out on the Cars universe, we'd see that it's all in the mind of an Andy-type little kid playing with their toy cars on the floor saying "vrrroooom vroom, Anndd the good guy car car is in the lead! Oh no a spy plane! ratatatatatat!" Actually, in this case, the kid is John Lasseter.

This is the kind of movie I almost feel silly for recommending, because the audience clearly made up their minds about it over a year ago. This is the curse of quality that Pixar bears. When you consistently put out brilliant works, you set an incredibly high standard for yourself, and your audience reacts poorly if you don't always meet your own mark. As a result, movies that would be considered "Okay" or "Pretty good" from any other studio are acknowledged as "terrible" and "toy-spewing spawns of Satan." If you didn't enjoy the first Cars, I can't honestly say there's anything in Cars 2 that will change your mind. If you want the heartstring-tugging of past Pixar works, look elsewhere. If, like, me, you thought the first Cars was an entertaining enough movie, and you're in the mood to see lengthy action sequences with cool explosions, well, it's a better choice than Green Lantern.

MINORITY REPORT: Everybody has been so quick to trash this film. And then everyone on the Internet is so quick to use that trashing to vindicate their own prejudices on the film. In the words of Tom Saxondale "That's a platitude, but that's a big word, like 'trampoline.'" - Ian "ProfessorClumsy" Maddison