Rock and Roll Badboy, submitted by lowtax. This site is all about Bret Meisner, a true ROCK AND ROLL BADBOY! 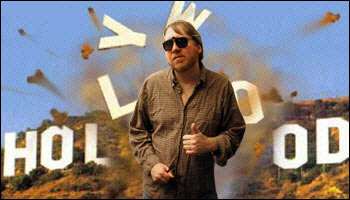 After receiving a six-figure settlement from his accident, Brett moved from his parent's home and began his career with a vengeance. Landing a column in the local paper, Brett made his mark with incendiary reviews of the local rock scene. Having been a successful musician, Brett was able to understand the art from a different point of view than most rock critics. Lester Bangs, Cameron Crowe and Lisa Robinson were Brett's targets. They had made a mark, but he would leave his. A local college soon recruited Brett as an afternoon Deejay. The radio show 'Brett's Tasty Biscuits" would be heard by a legion of loyal fans daily, and set a unique format for 80's rock radio - are you listening Howard Stern? Copied by many, the popular show was canceled six months later as Brett and a short-sighted program director had an ugly argument about the meaning of "true ratings." Out of a job and out on the streets, Brett kept his dream alive.

That's quite the success story! Truly, you are a rock and roll bad boy! With such an inside look into the hollywood music scene, you should thank your lucky stars that he tells the "hard truth" that no one else could...

"MUSIC DOES NOT SOUND BETTER ON POT: What is marijuana's contribution to the world of rock and roll music? Absolutely nothing. Peer pressure to the extreme is what it is. So why is the myth and allure of pot so strong? Simple, it's just like a Club Med vacation. Confused? Follow Brett's logic on this one: You spend a whole bunch of money to travel to some second rate island that doesn't want you there in the first place. Then they feed your watered down margaritas and make you dance - even though you clearly protested against it. Finally you get rejected by all the women on the trip - who all happen to be from New Jersey. Come morning time you awake on the floor of your room in a pool of your own vomit feeling suicidal and nauseous. Meanwhile, some guy with perfect teeth and wind blown hair named Hap scores himself a baker's dozen in primo tail. This cycle repeats itself for 6 days, only getting worse, and then finally when you arrive home and your friends say 'How was it, Man?' You say - and here comes my point - you say: 'Fucking Awesome!' "

You read right - he referred to himself in the third person. Follow Scott's advice everyone, don't visit this site! Or if you do, at least be creative and add to this bad boy's message board.