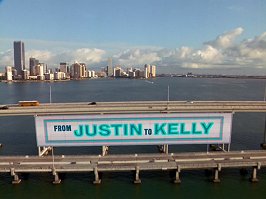 The Case For: Within 81 minutes, you can witness the entire meteoric rise and subsequent plunge of the careers of two young movie stars.

The Case Against: Justin and Kelly's onscreen chemistry reaches so far into the negative it actually sucks chemistry out of nearby objects. In their vicinity, water spontaneously freezes and gold transmutes into lead. 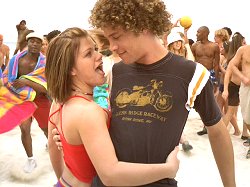 YOU LOOK TASTY.Unlike nearly every other entry in the endless parade of crap reviewed on this site, you might actually have heard of "From Justin to Kelly: The Tale of Two American Idols". This name recognition could potentially raise two problems. First is the prospect that you might already be familiar with the movie and thus take issue with something incorrect I might write. This differs from a review of "Idiot Vampire Movie #277" or whatever other nonsense I write about, where only four people on the planet have seen the movie in its entirety and I could have written the entire thing using a Ouija board without anyone knowing better. The second problem might be that you have actually seen the movie and so this review is redundant. Of course, anyone who watched this movie probably had enough pent up self loathing that they have already ridden the vein pain train in a lukewarm bathtub. In which case, congratulations on being dead! It is obvious you didn't quite make it into Heaven, which has a standing gag order against anything related to "American Idol". Better luck next time.

What do you get when you take two flash-in-the-pan celebrities from a reality TV show and fling them in front of a camera without any lessons in screen acting, line reading, or simulating basic human emotion? "From Justin to Kelly" decided to find out. I suppose it's fitting that one of the worst shows on television today would have managed to spawn a Hollywood film that manages to raid the lint traps of sheer ineptitude so severely that it makes "Battlefield Earth" look like a sci-fi epic for the ages. Not only could neither Justin nor Kelly act their way out of a paper bag, but they wouldn't be qualified to deliver bag lunches to the other soap actors on set. Thankfully, one half of the dynamic duo has already returned to blissful obscurity. We can only hope this movie will soon follow.

The movie opens with Kelly Clarkson, whose character is named "Kelly" for some unfathomable reason, standing on a stage and belting out a crappy generic pop tune. As she pours her heart and soul into the song, the camera slowly pans around her to reveal a run down Texas restaurant deserted of all customers save one. I am not sure if this movie is taking place in an alternate timeframe where Kelly was never discovered and instead was forced to perform to audiences numbering in the single digits, or if it's supposed to take place in 2007 when the same will probably be true. Either way, as the song ends, Kelly comes down from the stage and starts cleaning tables while her one solitary fan, a completely generic cowboy named Luke, starts clapping wildly and telling Kelly just what a boot-stompingly wonderful singer she is. Kelly appreciates the compliment but immediately shuts down Luke's game, telling him, "I'm just not interested in you romantically." Apparently Luke has never read up on speed seduction because everybody knows that treating a girl nicely and paying her compliments is a one way ticket to dumpsville. His smile flickers a moment, but then he replies, "not yet, but just wait! I'm like Hurricane Luke, pretty soon I'm going to blow you over!" Okay, maybe he has read about all those lame-ass speed seduction pickup lines.

As Luke slinks off, probably to rope cattle or something, Kelly's two friends wander in to visit her. There's "Alexa," the token black girl, who I determined is probably named after the web browser plugin of the same name, because I couldn't find another distinguishing characteristic over the course of the movie. Then there's "Kaya," a skinny, snobby, rich-yet-trashy blonde. Amazingly, the character is not played by Paris Hilton, as SAG regulations probably require a certain minimal level of acting ability in any production.

The two girls briefly commiserate with Kelly about her crappy job but soon enough their true motive becomes clear: they need a ride to Florida to party during spring break. "We were going to fly, but our charter airline went bankrupt," Kaya explains. God knows that the prisses wouldn't be caught dead on a passenger jet, so instead they require the taxi services of Kelly and her old piece of shit truck. "If you don't come, we'll kill you," says Alexa, and I couldn't tell if her utter deadpan expression was a failed attempt at dry humor, or if she was completely serious. 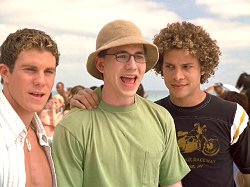 Watch out for the Pennsylvania Posse! They are wanted in... actually, no one wants them, sorry.As the girls pack up and go, the movie shifts to Miami, where Justin Guarini, who here is called "Justin," is arriving in Fort Lauderdale with his best buds, who include an obviously gay man in deep denial and an internet nerd. Calling themselves "The Pennsylvania Posse," they apparently have some business venture set up which involves throwing extravagant pool parties and exploitative bikini contests. Needing a business partner with an IQ higher than that of a toilet brush is the only possible reason why the dork is kept around, since within seconds he begins whining about being lactose intolerant and talking about how he's planning to meet a girl he knows online. "We've been CYBER-CHATTING for like a YEAR," he explains, and instead of turning around and socking him in his pudgy white gut, Justin and the suspiciously lispy Brandon just keep walking. "She's so hot," continues uberdork Eddie. "You should see her webpage, it's really well designed." Maybe Eddie has photos of the other two murdering a hooker, because even a computer nerd like me would only be able to take five seconds of Eddies stupid blathering before asking him how to install Linux on my VCR and quickly running away while he sputtered with incoherent confusion.

As the guys start wandering down towards the beach, the three girls pull up nearby in Kelly's truck, which was built sometime during the Crimean War. Kelly starts to pull the luggage out of the back when Kaya, who was apparently wearing a bikini the whole car ride there, tells Kelly to lay off the manual labor and the three scamper down to the beach, leaving all their belongings out in the open for a helpful passerby to carry into their hotel for them. The beach they arrive at is apparently the ultimate culmination of all beach-related stereotypes, including volleyball players, parasailers, a skateboarding half pipe, and some bodybuilders who literally have their weight benches set up on the sand. The only thing missing is the ancient leathery man ogling all the girls, although I am sure there was one standing somewhere to the side of the cameras.

All this dialogue and plot advancement must have been making Justin and Kelly uneasy because the embarrassingly generic pop beat accompanying the beach party suddenly turns into an actual song when all of the main characters suddenly burst out singing and the beach partyers instantly turn into skilled choreographed dancers. Alexa, Kaya, and Brandon all get their turn at some lyrics while dancing and flirting with the first member of the opposite sex to wander onscreen. Eddie sings about how much of a pussy he is and how he can't talk to girls. Then right when I started to wonder where Justin and Kelly had gone to, the two of them suddenly appear on screen together, dancing and touching with a lewdness just toned down enough to keep a PG rating. Even though this is the absolute very first time the two have ever seen each other in the entire movie, they grope each other while singing lines like:

Justin
Should we really play this game?
Can you tell me what's your name?

Kelly
Does it matter all the same?
You can see in my eyes that we'll meet up again

Then the two of them dance away from each other, because the movie wouldn't spend an eternity while the two of them attempt to find one another again if they had, you know, exchanged numbers like normal people. After the entire crowd breaks it down and whips out some more dance moves, the song comes to an end, and the entire crowd pauses awkwardly, as if unsure of how to transition smoothly back from the music world into normal everyday life. They should have asked Justin for pointers.