The TARDIS Keyhole - a naughty episode guide to Doctor Who!

Wednesday, Jun 26, 2002 by Rich "Lowtax" Kyanka (@TwitterHasBannedAllMyAccountsEver)
Know of an awful site? Send it to us and become a hero!

The TARDIS Keyhole - a naughty episode guide to Doctor Who!, submitted by Nicholas. The Internet is a great tool for promoting free speech, creativity, and the sharing of interests and ideas. This, of course, means that the Internet is really full of idiots (for example, you're reading a website run by one). To further illustrate my already obvious point, please let me direct you to the direction of "The Naughty Guide to Doctor Who," a site run by a person who attempts to answer the eternal question, "which Who companions were threatened with a spanking?" You know, because I'm sure everybody has been wondering about this since the first time they saw that British guy with the huge scarf and the flying telephone booth. 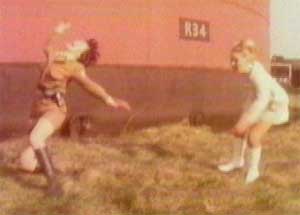 We don't get a very good look at any parallel-world panties, even though alt-Liz and alt-Petra are knocked off their feet by the earthquake in Part 6: first of all it's in long shot, and the second time there's a heat haze fogging the view. But at least Liz falls with her legs open, and we see enough to know that she's certainly not wearing her khaki uniform undies! They seem to be light coloured and possibly patterned... pale blue at a guess.

Anyone is free to use this site provided that they are legally entitled to do so according to their local laws. Text from the site may not be reproduced without the written permission of its originators. Images may be reproduced, but I would be grateful if anyone doing so would include an acknowledgement of the site: I want people to be able to read the words as well as look at the pictures. This is also with the understanding that if any material is ever removed from this site due to copyright infringement, any other copies of the same material shall be removed from any other web pages at once. No responsibility is claimed for other web pages that may link directly to this site. Any URL beginning with:- "http://www.consoleroom.com/" OR "http://consoleroom.com/" is considered as being part of this site, and as such subject to this notice.