It's been more than a year since the last installment of Your Band Sucks, during which time hundreds of disgustingly putrid bands have sucked without repercussions. I've felt like Charles Bronson in Death Wish 3, peering furiously through squinted eyes as these criminally incompetent groups swaggered around like they owned the streets. Well, it's time for me to load up the hunting rifle and cull this herd. They call me Garbage Day, friends, and it's my sworn duty to shitcan at least one offender each week, usually some young-gun band trying to make a name for itself. But for my first column, I wanted to take care of some unfinished business. Any good vigilante-sequel hero needs a familiar villain to vanquish before he confronts fresh nemeses. 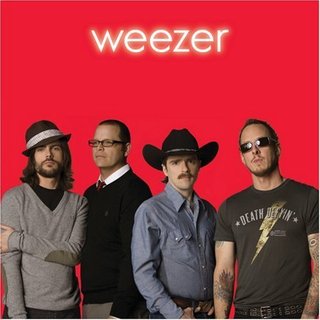 Well, apparently you've all been horrid, lackadaisically wishing fucks, because Weezer just returned with "The Greatest Man That Ever Lived," a back-from-the-grave abomination more vengeful and violent than any of the undead droolers from George A. Romero's last few age-addled zombie debacles. This amalgamation of wretched elements nearly completes every square on the Rock Atrocity Bingo card, leaving only the "disco diva wailing over generic dance beat" corner of the grid unscathed. (And at this point in the band's creative decision-making degeneration, I can't rule out Weezer releasing a techno remix.)

"Greatest Man" opens with the Barenaked Ladies-caliber couplet "You try to play cool like you just don't care/but soon I'll be playin' in your underwear." Undaunted by the astronomical odds against creating a proportionately annoying backdrop, Weezer supplements this gross chant with blaring sirens. Now, the siren is an obnoxious ingredient under any circumstances, but at least rap songs provide contextual clues (rapper: They got me runnin' from the cops; synthesizer sound effect: wee-ooh, wee-ooh) to keep drivers from yielding to imaginary emergency vehicles.

Weezer's inexplicable sirens provoke reactions ranging from understandable (stress about unexplained police process, especially from listeners with outstanding warrants) to fantastical (maybe there's, like, a covert government organization dedicated to the eradication of cruel and unusual musical punishment, and its agents set their high-sensitivity scanners to detect in-song crimes such as white dorks delivering smarmy pick-up lines in rap cadence, and they stormed the studio to execute Weezer without due process based solely on the damning evidence provided by those opening lines).

The sirens served one valuable purpose, temporarily distracting me from Cuomo's relentlessly asinine lyrics: I'm like a mage with the magic spell/you come like a dog when I ring yo' bell/I got the money and I got the fame/You got the hots to ride on my plane. Problems:

1) Likening oneself to a "mage with the magic spell" is an overapt simile, akin to "I'm like a dentist with the dental skills."
2) Long-suffering Weezer fans now respond to new material with intense nausea rather than anticipatory salivation. The relationship is less Pavlov's dog hearing the dinner bell and more Alex in Clockwork Orange greeting Beethoven's Ninth Symphony with involuntary heaves following his aversion therapy.
3) If there's anything more insipid than ostentatious rock-star materialism, it's ironic rock-star materialism. Weezer alternates between two settings, self-deprecating "sincerity" and broad parody.

With "Beverly Hills," Weezer unconvincingly claimed that despite being millionaires gallivanting on major-label largesse and catering to an adoring, unbelievably resilient battered wife of a fan base, they fret about being ostracized because of their nerdish origins. "Greatest Man" proposes "this is how other musicians think of you, but not us, your old buddies Weezer. Yeah, we've got the money, the fame, and probably the plane, but we're different because, um..., hey look, the music just changed!"