Wednesday, Nov 20, 2002 by Rich "Lowtax" Kyanka (@TwitterHasBannedAllMyAccountsEver)
Know of an awful site? Send it to us and become a hero!

Mark Allen Cam:, submitted by Uber. Cyber-relationships are very difficult, particularly when you're a gay man in New York City dating a man in Austin, Texas, and you both seriously use words like "cyber crush" and "cyber relationships" without immediately laughing to death afterwards. Mark Allen, arguably the most homosexual Mac user in existence, has written approximately nine trillion words on the topic of online dating, almost all of which can be summarized as "it's good." Well, except when "it's bad." 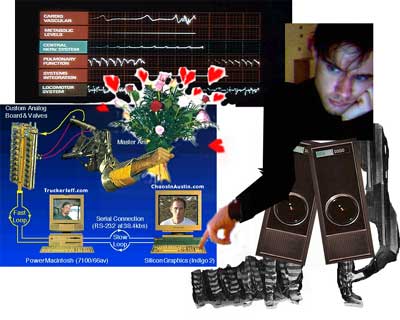 You know that great 1977 movie "The Demon Seed" starring Julie Christie and Fritz Weaver? You know where the scientist guy builds the perfect house robot brain, "Proteus", a super-intelligent interactive computer envirosystem that does everything from letting you in the front door to making your food and regulating heating systems beneath the floors? The "house of the future"? And then while the scientist guy is out working too hard and his beautiful wife feels neglected the super computer house brain falls in love with the wife (whom I think subconsciously led the computer on because she was bored with her sex-less, work-obsessed husband, and so she teased it on by undressing seductively while the Proteus bathroom eye camera was watching and coyly pretended not to notice)? And then the computer takes advantage of the situation and does all these things to charm her, like produces synthetic flowers for her as a surprise and talks lovingly to her with it's robot voice, things her flesh husband never did, and then it traps her inside the home and won't let her leave and then uses it's super brain powers to hold her down and rape her and somehow impregnate her with a half machine half human baby and then she gives birth to it? I want a robot boyfriend like that!

Bryan is very smart, very quality, very nice (although he does have nazi tendencies - he comes from a German background you know). But he was a little too nice sometimes. Oh Bryan, when we were cyber-dating why couldn't you have turned "bad" and somehow raped me through my computer and forced me to give birth to a half machine half flesh monster that represented our love? It wouldn't have been THAT difficult now would it have? You used to be a hacker!

You go girlfriend! Er, boyfriend. Whatever. Either way, the story has a highly unhappy ending which I will spoil for all you people who don't want to spend nineteen days reading the site:

Computer Bryan and flesh Bryan and the very difference between them disappeared and crept back into the dark, cozy back shelves of my subconscious. Waiting until they are needed again for my next cyber affair. My corner in my apartment in New York is still there... still alive and kicking. But computer Bryan doesn't live inside it anymore, now that I've met flesh Bryan. The real Bryan took center stage in the warm, cozy, confusing real world that keeps going going going all around us all the time.

Well, duh, I've seen like nine episodes of that Showtime series "Queer as Folk," so I could've predicted that this relationship would've never worked! You crazy gay people go through hundreds of different sexual relationships every hour according to that show! Sheesh... once again guys, if you want practical, truthful advice, turn to the television.

PS: I don't know if he has a guestbook or not, I didn't bother checking because if I posted it then a good number of people from this site would simply flood it with highly comical and witty remarks such as "YOUR A FAGGOT!!!" and "FUK U FAGGOT!!!" Sorry to disappoint you fellahs, but if you're all riled up and really want to call somebody a faggot, you can do it to me.