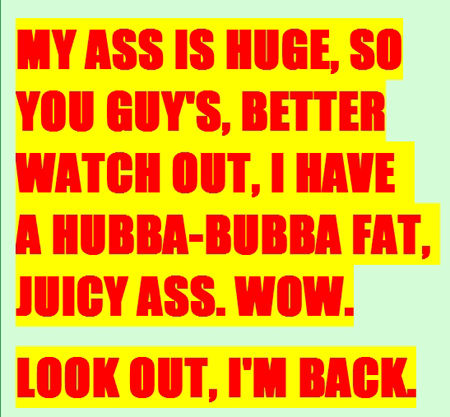 I guess it's unfair to expect strippers to have legitimate-looking Web sites. If I were busy bouncing booty on the stage, I probably wouldn't bother to learn HTML. Hell, I don't do that (much) and I still hardly know HTML. But man, you'd figure that no one would go out of their way to make their font background a completely different color than their regular background. But that's what MS. TYRA BANK'S AKA MS. ASS ALL-MIGHTY has done, goddammit, and I'm going to find some way to be proud of her for it.

Sure, it's an unbearably Geocities-esque site. And, OK, it's hard to tell when a new page has loaded because she uses the same opening paragraph for each section. But have you seen that booty? I'm sure you have if you've visited the site at all; it's impossible to ignore it. If not, scroll down! It's butt in your face, whether you like it not. So much butt. 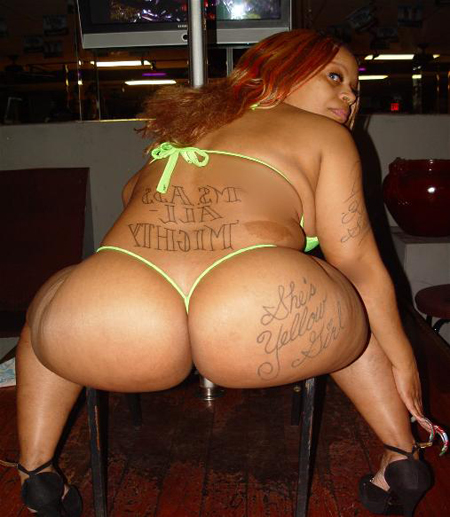 If you want to see Tyra Bank's in person, i hope you don't live in a major U.S. city, because she won't go most of those places. Especially not Chicago: I guess people there are mean to strippers. Then again, she's not a stripper. She's an exotic dancer or something who is 100% STRAIGHT JUST SO EVERYONE KNOWS SO NO LEZZY STUFF.

There's a gifts section, too, if you want to know what to get her. She likes everything from Winnie The Pooh and Spongebob Squarepants to uh ... motorcycles and komodo dragons? Christ. Yeah, get the large-reared woman a fucking death-lizard, that's a good plan. She'll have to find someone to take care of it while she's gallivanting around the country (DEFINITELY NOT IN CANADA), but whatever. Get her two, maybe you'll get a lap dance out of the deal.

Also, if you want to be a slightly smaller-bootied version of Tyra, be sure to let her know. Apparently you can try out for the same guy who made her this totally rad Web site. Definitely worth it, just hope you have a 51" ass cuz it's gonna be hard to beat this Tyra lady. Real hard.