Wednesday, Jan 22, 2003 by Rich "Lowtax" Kyanka (@TwitterHasBannedAllMyAccountsEver)
Know of an awful site? Send it to us and become a hero!

Bye Bye American Pie!, submitted by Bryan. Everybody loves a good, entertaining, rambling nutjob wacko conspiracy website! Well, I mean I love them. I don't know what the hell you love, but if you're currently reading this website, it's undoubtedly something perverse or tacky or stupid. "Bye Bye American Pie!" tackles such tough issues as the apocalypse, dead people, a picture of something exploding, the lying US government, the anti-Christ, drugs, singing, and many other hot subjects which might be really interesting to read if they made ONE FUCKING IOATA OF SENSE. I'm not sure, but from what I can tell, America is a pretty crappy place that Jesus and George Washington both equally loathe. This makes me sad because, hell, I knew Jesus hated our country, but George Washington? I thought me and him were tight, yo. 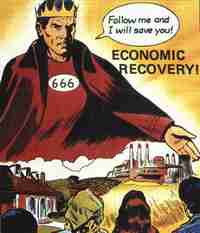 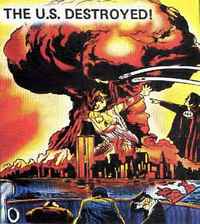 Oh man! How am I going to get to sleep tonight knowing all those horrible things about my country? Oh wait, I live in the MOST SELF-CENTERED and MOST UN-INFORMED NATION IN THE WORLD so I don't really give a flying crap about some wacko's apocalyptic website of a million fun ideas. I'm so self-centered and un-informed that I think I'll go and stare at myself in the mirror for hours, unaware that a big Batman guy wearing a "666" cloak is about to drop an atom bomb on New York while the Three Stooges look on in terror. Oh what a calamity!

PS: There is a guestbook you can sign, but only if you hate America (HINT: you do). Additionally, it seems to be full of messages about dragons, Christ, UFOs, and sex. I don't have any clue how all these topics tie in to each other, but that's probably because I'm hypocritical and self-centered and un-informed and debt ridden.

PPS: The guy apparently also claims he can predict the future and speak to Jesus on a regular basis. I decided to point this out just in case you didn't think he was crazy enough.