Saturday, Feb 01, 2003 by Snakey Slithers
Know of an awful site? Send it to us and become a hero!

Copies Plus Printing, submitted by ME!. I stumbled onto this crap while looking for "teleportation" pictures. Who in their right mind would ever pay this weirdo to do graphic design work for them? Even better question, why is it that people who are obviously mentally retarded in some major and completely unacceptable way decide that the way to succeed in the world is to operate a graphic design business wherein they drool onto the computer screen and subsequently offer to sell their shit to people? Part of it must be that the average layperson knows jack about computers and just wants to get their project completed and doesn't care how it looks. Part must also be that the retard wrangler at the local zoo thought that it would be a good idea to get the retard working on something so that he or she thought that they were "like people." In any case, what results is a hideous mess, as demonstrated by today's terrible link. Just look at this junk in this d00d's portfolio: 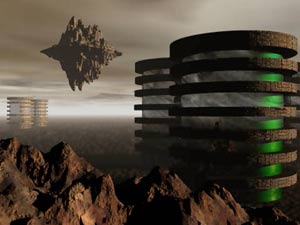 Keep in mind that these pictures are supposed to make you want to hire this guy to do design work or printing for you. This one was like he just opened Bryce 3 and used the heels of his feet to bang on the keyboard and push the mouse around in order to produce this ugly disaster. Glad to see that he envisions a world in which a giant lump of shit hovers in the smog-filled sky above a giant bug-zapper. A true visionary! 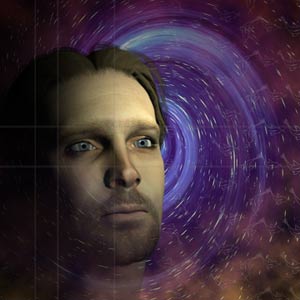 AAAGHH!!! Someone take Poser away from this guy STAT! Wow, this really makes me want to give this guy a lot of money that I worked very hard to earn so that he can produce something similar to this thing for me.

The scary thing is the part of this page where he says, "Our services and capabilities are now going to be coming into your home or office." NOOO!!! Call the police! Call animal control! Whatever you do, don't let this guy anywhere close to your home or office. Stay as far away from him as you possibly can.