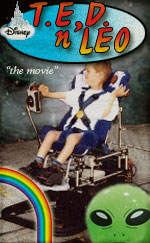 Tagline: "From our family to yours, a magical journey of lighthearted whimsy and fanciful dances of extraterrestrial mischief await!"

Plot Outline: A cute green alien pilots his UFO to Earth, in order to observe and report on an average Earthling family to his grumpy space bosses. During this time, he learns the meaning of love, a pure heart, and fatal... (more) (view trailer)

User Comments: the reprots of macrus going to see a shrink are FALSE AND I CAN PROOVE THIS!!! THERE IS A CABAL OF FURIOUS POWERMONGERS IN HOLLYWOOD WHO WA WATN TO DESTROY THIS MANS CAREER AND WANT NOTHING MORE TO THEN TOO SEE HIM FAIL SO THEY MADE UP THESE RUMORS SO HE WOULDTN BE ABLE TO DIRECT A SEQUEL!!!!!! THGEY ARE ALSO SPYING ON HIS HOUSE USING MICROWAVE BEAMS AND HAVE STALKED HIS KIDS ADN PETS AT LEAST... (more)

Mark Bellsby: This is going to be the greatest, best, most fun Halloween ever! Right Family?
Pammy Bellsby: You're darn right it is! I love you, Marcus! Mark.
Mmelimma Bellsby: And us kids love you too!
Meric Bellsby: My body from the neck down might not work, but my heart sure does, and it loves you so much pop!
Mark Bellsby: Way to put your heart inside your head, you little crippled masterpiece!

Pammy Bellsby: Did you just hear that sound? It sounded like the sound of an alien... crashing right into our corn field!

[Crashing sound effect, not unlike the sound of a brick being thrown into a sheet of plywood, is heard on the left channel.]

Mark Bellsby: We'd better go investigate! Come on, family! Let our love and curiosity give us the energy to comb the entire area all night, if that's what it takes!
Meric Bellsby: But dad! It's a school night!
Mark Bellsby: Why do you care, it's not like you're going anywhere anyway, wheelie.

Mark Bellsby: The cute, loveable alien has awoken from his coma!
Pammy Bellsby: He's so beautiful, Markuh- Mark. I wonder what wisdom and knowledge he can share with us!
Mmelimma Bellsby: Wisdom? Knowledge? That's groadie to the max mom! Gag me with a spoon! What I want to know is if Brad will ask me out to the dance next week!
Mark Bellsby: Now honey, you know what I said about that 'Brad' character. He's ten pounds of trouble in a 150 pound bag!
Mmelimma Bellsby: Daaaaaad!!! (Crying) You said you'd never weigh Brad!!! (Runs off set)

Government Agent 48043: NORAD spotted a suspicious object flying around your home last night. Now you wouldn't happen to know anything about that, would you?
Mark Bellsby: It was probably my wife. On her broomstick.
[They both laugh]

Government Agent 48043: Mr. Bellsby, we can't go around arresting every woman who's a witch! We'd end up putting the entire female population in prison!
Mark Bellsby: Maybe that's where they belong. At least there they can't sleep around with your deadbeat brother and claim they're just going to a gun show every weekday.

Rude Grocer: What's all that infernal racket? It sounds like there's an alien in my store! Why I never...!
T.E.D. the Alien: Can't catch me! Can't catch me! (claymation version of himself runs around the store, knocking over cans of peas)
Rude Grocer: You rotten little...! If this wasn't such a bad grocery CENTER, I'd put you in a shopping BASKET for trying to STEAL my produce! I'm gonna sue you and give you a FULL COURT PRESS!
T.E.D. the Alien: Hee hee silly Earthling! You guys don't have any PRIDE at all!
Rude Grocer: (Pratfall, followed by slide whistle and farting sound effect)

Mark Bellsby: (Visibly drunk) T.E.D.... you've taught me so much about... what it's like to me, um uhrrrrrrrrrr, huuuman.
T.E.D. the Alien: The teacher has become the teachered.

Government Agent 48043: I can't believe you let that pesky alien escape! Who knows what secrets he could've revealed to us. The secrets of the universe... all gone...
Mark Bellsby: (Visibly drunk) He drank, he drank all my alcohol. I needs some, I needs some more now. Where's he take it all? ON HIS UFO!!!
Government Agent 48043: I'm sorry sir, I'll get you some more alcohol to put on your cuts and open wounds, as well as call for medical attention. I'm sorry that alien attacked you and then murdered your wife.
Mark Bellsby: YES IT WAS THE ALIEN!!!!