GokuFievel, submitted by The Priapism. It's East meets West in an all out battle of animation styles on this clever, coherent, and well-informed website! That's what I'd be saying if I was absolutely insane. Instead, Boise native Aaron Banks has the monopoly on insanity and I'm left with my poor, aching brain. Aaron is just one more of the hundred of thousands of hapless idiots that the internet has called out of hiding. His specialty is writing about Fievel movies, Dragon Ball Z, and September 11th without saying anything of any value about any of them. Apparently, he used to write some fanfiction as well (always a sign of greatness), but he took down his story about a super saiyan destroying New York after 9/11. 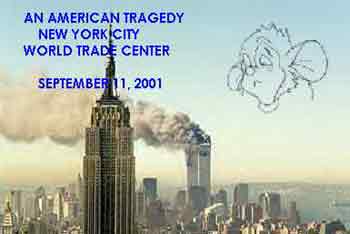 Now we're left with only his incessant babbling about all things Fievel/DBZ. For some reason, Aaron seems convinced that he has some sort of sense of humor (SPOILER: he does not), so he throws "jokes" into his reviews at random, such as in this excerpt from his review of "An American Tail." Look for the humor! It will be very, very difficult to find.

On the ship to America, Fievel got a little curious. He wanted to explore the ship by himself. BIG MISTAKE. You've heard of curiosity killed the cat before right? Well, Fievel's a mouse so he can't die from it,…can he? No, he just gets in serious trouble! Fievel explored (a wee bit too far) try, over the edge! Fievel fell off the boat in a storm. His father witnessed his only son go over board. And I don't think that the sea captain will turn around for a mouse. It's a scary moment in the film he doesn't just fall off like that! He tries to stay on board as long and he can hang on to his little hands. But he fell off and went into the North Atlantic Ocean and vanished into the sea. While his father is crying out his son’s name. Sniff! Tragic isn’t it?

I have to say, he really captures the pathos of the film. Oh, sorry, that was a typo. I meant to say, he really is a gibbering idiot. His writing is peppered with creative spelling and punctuation. His favorite writing technique, however, is the "italicize, underline and change the color of totally random groups of words" method, first used by Shakespeare in his classic play, Hay Guys, Check Out My 1337 Haxoring Skillz!!! Friggin' Shakespeare. Like every DBZ fansite in the world, this one includes a complete description of every second of action of every episode that Cartoon Network has shown thus far. Actually, Aaron's a bit behind, but he promises to keep up. He does have one thing going in his favor, though. Aaron's episode guide is peppered with incisive political humor, all of which revolves around the 2000 election for some reason.

Meanwhile Cell alerted the Press by destroying half of a major city and by telling the media about the Cell Games and what the outcome would be if all of Earth’s fighters lost. Cell wanted the Media to be at the Cell Games so that the people of Earth would be at constant fear of the tournament.

Unfortunately the media went, “If it’s got nothing to do with George W. Bush, Gore, Clinton, the Election, Abortion, the Environment, Gas Prices, or Tax Cuts…we don’t want to hear about it!”

Just kidding, they never said that! The Media was stunned and scared of Cell instantly! Suddenly the whole world was alerted about Cell’s threat. The media then did 24-Hour coverage of the Cell Games, but they did NOT know anything about Goku or the Z Fighters. They just assumed that one of Earth’s celebrity fighters would save the day.

Oh ho ho ha ha ha ha ha ha! You got me there, Aaron! If you hadn't cleared that up, I never would have known that the Japanese kids' show didn't make commentary about controversial political events in the United States, and the confusion would have driven me to suicide! Ha ha ha! Oh, dear me, you'd think it couldn't get better than that, but then you wouldn't know Aaron! Aside from having total mastery over all things pointless, he's also a real cut-up of a comedian! Just check out one of the wisecracks from his jokes page:

Despite the fact that Al Gore has given up the Election and is starting to slowly fade away, he still told news reporters that if he managed to get all of the votes in Florida counted…he would have won for sure!

BWAHAHAHAHAHA!!!!!11 Take that, Hercule! It's not all laughs and fun at this site, though. There are some negative points. I feel like I should mention the layout and general design of the site, as they both are... oh, how to put this... indescribably shitty. The backgrounds are hideous masses of tiles, each one comprised of a different low-quality image. It's almost impossible to pick one specific page as being more painful to look at than the others. The text on the main page is condensed into a narrow column for some reason, so that all of his news ends up stretching on endlessly before you can even find the links to his so-called content. Aaron apparently has some sort of disability that makes it impossible for him to make one paragraph the same text color as the next paragraph, so reading his site is like a neon rainbow of unspeakable pain. There's so much to hate about this site, it's honestly a struggle to really capture it in just one day. If you choose to visit Gokufievel, Aaron seems to want to hear from you very badly. Let him know what you think by signing his guestbook.