Tuesday, Apr 22, 2003 by Rich "Lowtax" Kyanka (@TwitterHasBannedAllMyAccountsEver)
Know of an awful site? Send it to us and become a hero!

THE ENEMY WITHIN, submitted by Bob the Impaler. Meet Brig. Gen. Gordon "Jack" Mohr. He has an awful lot of things to say about the current situation in America regarding those pesky Jews and their anti-anti-Jew propaganda machines! Brig. Gen. Gordon "Jack" Mohr knows that America can only return to its roots as an honest, true, powerful country by becoming exponentially more Christian and killing or at least shipping away all non-Christians who might interfere with his thoughts and beliefs, whatever the hell they may be. To tell you the truth, I didn't read 99% of the crap on this page, partly because it was really long, partly because I didn't really care, and partly because it had a distinct lack of pictures showing sexy hardcore Christian fetish action. 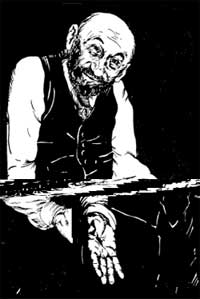 The Zionist-Communist anti-Christs have not changed one bit in the 54 years since this threat was made. Yet the stupid Christians of America are indeed asleep. They still believe that the Zionists want peace. But playing ball with these hypocrites is like playing "patty cake" with a rattlesnake. Sooner or later, you are going to get bit.

Isn't it strange and somewhat hypocritical that the AMERICAN JEWISH CONGRESS who opposes integration and intermarriages for Jews would back it in the case of Blacks and Whites? Could there be some ulterior reason for this? Maybe that's why Jesus Christ called them liars and hypocrites. (See Matthew 23:13-15; 23-25; 27-36, and many other Scriptures.)

Damn Jews! They simultaneously control the worldwide government, yet simultaneously want to destroy the world government! How the hell does this work? I'll give you a hint: I think it has something to do with the "liberal media" or those floating alien rods which the reptile people dumped on our planet for reasons I can't explain at the time. Blame the damn Jews!