What to Say to Friends and Family About "Duck Dynasty"

Facebook and Christmas gatherings are in danger of melting down following the suspension of Duck Dynasty star Phil Robertson for making anti-gay comments. To help prevent Duck Dynasty drama from spoiling the upcoming week, here are some strategies for dealing with the inevitable conversations.

If you don't mind tacitly approving of gay-bashing, you can try to be sympathetic about the hard breaks for the duck dudes. Give one of the following a try on Facebook or around the Christmas meat pile: 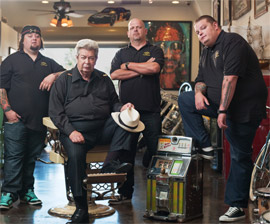 "At least you still have those irredeemable monster bodies on Pawn Stars to talk to fake customers about rusty swords and autographs. I bet a couple of them secretly hate gay people too."

"So long as the gays leave Christmas alone, I'm willing to let this one slide."

"A duck dynasty falls, bringing a close to the cycle of our duck culture. Do not fear endings for they are beginnings in disguise. It is the way of all dynasties that another will rise to lead us into the new age. Like when they had that spinoff show to American Chopper."

"Hey, God took care of that terrorist Mandela, I'll trade a duck dynast to be rid of that commie scumbag."

"Leave it to the 'tolerant liberals' to try to take away duck man's first amendment right to be employed by A&E network. Thomas Jefferson would be shittin' blood if he knew about how the gays are ruining basic cable."

Contrary to what you might have believed from reading your Facebook feed, not everybody watches Duck Dynasty. Play stupid and maybe they'll change the subject. Toss out one of these:

"Sorry, I am unfamiliar with Duck Dynasty or homosexuals. I only have time to watch weather related programming."

"I don't own a TV or a computer in my house that I don't have because I don't own a house either. I've never watched TV or read a book or listened to music, I'm not even a person, I'm a bug. Hi."

"Sorry, I hadn't heard about Duck Dynasty. I was on the phone all night because apparently my wife was having an affair and the hospital called and I guess the guy had sex with her so hard that she died. No, no, we'll be fine. We're just putting the pieces of our lives back together. I don't want to ruin Christmas. Did you want to fill me in on this Duck Dynamite thing?"

"Ah, I had the TV on but I couldn't hear anything because people wouldn't be quiet at the cocaine party I was at."