IbisTek's Security Vehicles, submitted by Hammockz. You may have heard of this company before, they do customization jobs on SUVs to make them into gun-toting flame-shooting armored vehicles. While some of the stuff is interesting they are obviously no competition for Arlogeist's latest "Blood Harvester" SUV. They've got machinegun turrets and armored glass, we've got a steamroller on the front covered with razorblades and a system that scalds people with hot steam if they get within 100 meters of your car. Hell, they don't even have a launcher that fires small pox infected blankets at Native Americans as you drive past. 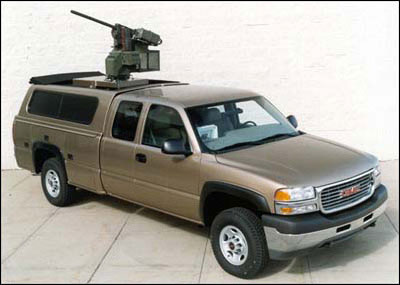 The SWARM is a self-contained, stabilized, weapon and sensor system that can be fitted to most types of military and civil vehicles, Naval and Coastgaurd vessels and fixed platforms, e.g. border control posts. SWARM accommodates a wide range of low to medium caliber weapons, as well as visual sensors. Since the SWARM has a totally remote operation capability, the operator can remain in a fully protected enclosure. Where available, the SWARM accepts inputs from sighting systems and gyroscopes and can be integrated with existing fire control systems and gyroscopes.

SWARM! What a cute little name for their cute little gun! Our Blood Harvester has a deluxe package that mounts the actual artillery piece that killed General Lee at the battle of Slaughter Ridge in 1923. Not only is it ten times bigger than the biggest gun that piece of cardboard from IbisTek can mount, it's also haunted with the spirits of murdered negro slaves. Perfect for African dictators who need to kill and oppress their citizens the same way America used to!