Tuesday, May 20, 2003 by Rich "Lowtax" Kyanka (@TwitterHasBannedAllMyAccountsEver)
Know of an awful site? Send it to us and become a hero!

Pedders Suspensions Franchisee, submitted by Norm. At least one person on the Internet really, really, really despises Ron Pedder and the rest of his family who currently reside in Victoria, Australia. Who is Ron Pedder? Some guy, I guess. Who hates Ron Pedder? Some other guy I suppose. He never really says who he is or exactly why he has embarked upon this anti-Pedder crusade, but I can only assume there isn't much to do in Australia, and the things that you can do all revolve around Ron Pedder and his family in some way. 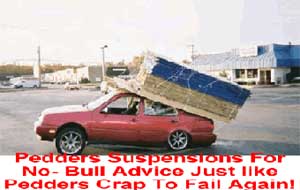 After Paul Evans had supplied Ron Pedder and his army of lawyers a load of dirty rotten laundry about myself they finally got their franchise back, Paul Evans was rewarded with a brand new spanking PAJERO as a bonus! While I was selling my children's home he was getting his PAJERO! Thank you Paul, I hope you are enjoying your family home with your daughters and your grandchildren. You can be proud of yourself for throwing me and my wife and my children out from our family home! At the end of the franchise while handing stock back for credit I had to employ a lawyer at $600 an hour because I didn't trust Paul Evans. Finally all the bullshit Paul Evans was spinning was wearing thin with the Pedders Head Office. Sales figures were still down, all the stores were struggling and Paul Evans was a useless State Manager and he was fired!! Paul Evans you are an abusive, lying, pommy bastard and I hope you rot in hell!( Shit head.)

There are many exciting images and colorful graphics accompanying the tales of woe and anti-Pedderness, including photos which have been circulating around the Internet for the past nine decades or so. However, they are all digitally "touched up" and disguised to look like anti-Pedder propaganda! How delightfully malicious! I don't know who the hell runs this site or how many family members of his were brutally slain by Ron Pedder, but you can be sure I'll never piss the guy off under the fear that he'll use MS Paint to caption my name under a clipart image of a penis. Oh, the Internet can be such a harsh mistress!