InFaMoUsRiCaN, submitted by F.M.J van Hasster. From the nearly incomprehensible yellow-on-white text at the top of the page to the gigantic, distended image of Bubbles from The Powerpuff Girls, hatred for this site sets in almost immediately. And that's without even a cursory glance at the actual content. Well, if there could be said to actually be any content. The site is owned by a fat Puerto Rican girl with what I have to imagine are incredibly serious social problems. The majority of the site is nothing but shout outs to various family members and friends, any and all of whom must be thoroughly humiliated to be mentioned amidst the verbal wasteland of this site. Even the scrolling pictures have captions with mind-boggling grammar, such as "ME AFTA I GOT MAH BRAIDS DID" (see below). 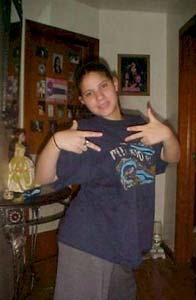 ERIKA hey youngsta... u kno i love ya lil azz stay up u dominican lol nosa u half lol love ya baby muah

WHAT? A dying porpoise could slap its fin on a keyboard and produce more coherent English than this. In fact, I'd like to see that. It would be a welcome change from this load of shit. This fatass slut, like many fatass sluts before her, is convinced that she's the most desirable thing on land. This may be because she ate all of her competition. If she and I were the last two people on Earth, I'd slit my wrists before laying a finger on her. While I'm on the subject, I'd also slit my wrists if I had to read her dam site any more or if I ever found a paragraph giving props to me.

Now, it would be unfair of me to say that there's nothing but shout-outs on this site. The truth of the matter is that there's almost nothing but shout-outs on this site. She also posted her results from every goddamn piece of crap personality test on the internet short of "Which Sexually Transmitted Disease Are You?" There is no reason to feel anything but the purest hatred toward this site. This girl is horribly proud to be Puerto Rican, but I can barely fathom the amount of damage she's doing to the reputation of her people. They don't want her. I think I speak for Americans everywhere when I say we sure as hell don't want her. This bloated street beluga needs to be destroyed before her language skills erode any further and she attempts to communicate by leaning on the semicolon key for hours at a time.