She frolics in the molten metal like it is water. 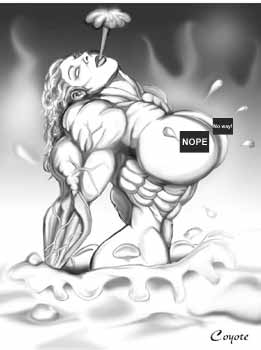 Yeah, that's just great. Keep frolicking, there, Veiny. Meanwhile, I'll be taking bets on how long it will be before your skin just says "fuck it" and lets your ungodly muscles rip on through. Don't get me wrong, I think women have every right to be a strong as they want to be, but there's musclebound and then there's immobile due to sheer mass of shoulders. As far as quality of the actual art is concerned, the above picture would be considered to be in the upper echelon. The rest of the stuff is more along the lines of this: 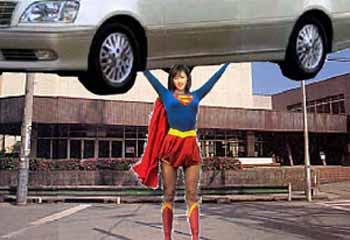 You know what I like best about that picture? How it is in no way photoshopped and how the proportions of the car and the girl are in no way completely the fuck out of whack. If eight-inch tall supergirls hefting cars is your thing, then you're sure to have a ball at this site. Of course, there are plenty of others things to heft, such as trains, trucks, tanks, and of course, freakishly pregnant velociraptors. Where would society be without those? A lot less crazy, that's for damn sure.