Stuart, submitted by Pixelchick. In a perfect world, people would have to have a licence to write. There would be a test that gauges grammar and spelling skills, technique, style, and the potential that you would ever have something meaningful and intelligent to say. That way, we wouldn't have to wade through mind-numbing tripe like this: 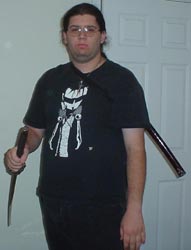 Just say no to insecure people who like to try and belittle you to make them self's think they are superior! Yes this is directed at some poor fool who decided to do just that to me with my own pictures. I'm sorry but I didn't work but if it makes him feel better I am sorry that you are such a jerk and cannot get true happiness only false happiness from making fun of others.

I am in college for a computer networking major. I build computers too. Soon I will begin to make computers and sell them in my local area and hopefully on e-bay as well.

On what planet and under what twisted circumstances is crap like this tolerated? Stuart has a whole host of wonderful delights to offer the visitors of his damp little hole of the internet. For instance, you can learn everything you'd ever want to know about his online roleplaying character, a vampire names Stuart Clad. Since I'm sure you want to know which guilds he belongs to and what all of his roll enhancers are. You do want to know, don't you? Don't you?

But there's more to Stuart than roleplaying! He's also an avid poet! That is to say, of course he's an avid poet. Because this is the seventh circle of Hell and I am being punished.

My family has always had nice things yet the “preps” have rejected me.

I have always been smart but the “nerds” or “geeks” have rejected me.

I have always-dressed dark and liked dark music yet the “Goths” have rejected me.

I was raised in the country yet the “rednecks” have rejected me.

I have been good at sports yet the “jocks” have rejected me.

I am an outcast yet the “outcast” rejected me.

Where do I belong? Why am I so alone? Why am I asked are you going to blow up the school? Why am I hated?

I am so alone.

I have been alone for years. Every group is now scared of me. I sit alone, I work alone, and I eat alone. After being alone for so long I want to end it. Any friend I have had was just to use me for my car or something else. I have never had a true friend. Will I be loved? Why does every one taunt me? Why do they throw things at me? Why do the teachers believe them rather than me? I’m so alone the only friend I have is the TV. Even that does not last as my step mom puts me on restriction. Now I sleep.. Maybe I will find a friend there?

Yes, that's right. This rancid pile of DNA has a girlfriend. One can only assume that she is as socially useless as he is, especially judging by the text on her "ssite," but that's not the issue. He has a girlfriend. Let me explain something to all you whiny quasi-goth losers out there: if you're in a relationship, you don't get to bitch about being alone anymore. Sorry, the jig's up. I don't care how pathetic the two of you are. You still don't get to complain about how nobody would ever want to be with you, then talk about how you're with someone. No one wants to hear your filthy attention-whoring, pudgepocket.