Bring Back Kirk, submitted by Psimitry. I remember liking Star Trek when I was ten. Two things have combined to change my like for Star Trek into an intense hatred for it. One is that the shows are all abysmally horrible, including the original. While normally this would be enough reason for me to hate something, I've also got the added bonus of Star Trek having a raving mad fanbase that spend every free moment thinking about Star Trek. One group of such fans put together a ten minute long movie about what it would be like if Kirk returned to the Star Trek universe and then a bunch of other insane shit happened. 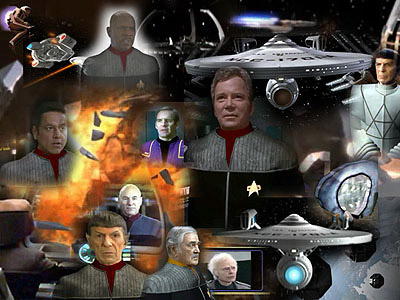 When Captain Kirk was killed in Generations, legions of Star Trek fans from around the world united to form the Bring Back Kirk campaign. The goal of the campaign is simple—to see Captain Kirk returned to the living, and to see the character have a happy ending. Star Trek has always been about possibilities. This short film is not so much an endorsement on a particular plot point, but an effort to show the exciting possibilities that Kirk’s return would bring. This nine minute trailer is truly an international effort, as it represents the combined work of fans from both the United States and the United Kingdom whose common bond is the desire to see Kirk return.

That's just a hint of things to come. You MUST download and watch this video. It is embarrassingly silly and manages to cram almost every single thing I hate about Star Trek - from the constant time travel to the idiotic technological anachronisms - into one short film.