Central Minnesota Ghostbusters, submitted by Nate. 1984 was an important year. Reagan was elected to his second term in office. I was born. And most importantly, "Ghostbusters" was released. Truly, it was a joyous time for all, except for a pair of idiots in Minnesota. Those unfortunate souls saw the glory and greatness that was "Ghostbusters," and were driven forever mad. Now, they prowl the streets and back alleys of central Minnesota (assuming Minnesota has streets and/or alleys), looking to rid the common people of the menace of ghosts. They have become... Ghostbusters! 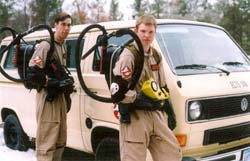 That's right, Ghostbusters. Not a couple of dweebs. But don't take my word for it. Let's see what they have to say about themselves!

The equipment shown in the picture above are actually real working technical devices that we use for our cases.

Yes, they really work to pump up the air mattresses these two winners sleep on in their parents' basements.

We are clairvoyants and have proven methods to successfully get rid of ghosts.

Wow, they're clairvoyants? So they can actually predict just how and when they will die alone?

However, please keep in mind that reality is different than Hollywood. In reality, we (Ghostbusters) will not guarantee complete spiritual removel. Central Minnesota Ghostbusters is strictly a NON-PROFIT organization dedicated to helping out the community with ghost problems and other paranormal related problems.

So, unlike the guys in the movie, they won't guarantee "removel" of the ghosts, but hey, at least they're non-profit! Damn that greedy fatcat Peter Venkman!

Our investigations are held strictly CONFIDENTIAL for public privacy.

"Public privacy?" I don't even have enough holes in my head to bleed out of. Okay, so these guys clearly know their business and how to make their clients happy. But just what exactly are they up against? Well, there are all manners of ghosts out there, and hell, these guys will even take care of any demons or devils floating around! Hot damn, they can bust ghosts, perform exorcisms, and they're still nonprofit! Oh, if only we could all know the joy of being their parents! Now, if you see a ghost, chances are, it will be a pretty simple little thing. For example:

Orbs: Orbs seem to be the most common ghosts. Orbs are bioelectric/ectoplasmic manifestations. They are often called "supercharged orbs" because they are very fast! Many people think that they catch ghost orbs on film, but they usually are the result of dust orbs NOT ghost orbs.

So remember, if you catch a ghost orb on film, it's probably just a speck of dusk on the lens. Now, with that in mind, here's a picture of a ghost orb. 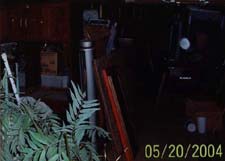 Wowzers. That sure is a convincing ghost orb. Well, I, for one, feel much safer knowing that if I'm ever in the central Minnesota area, and God willing I won't be, at least I'll be safe from ghosts. Thanks, Ghostbusters!