To air is human..., submitted by Crack Baby. Some horrible asshole and his collection of asshole fans put together this wonderful site dedicated to body inflation often mixed with furry art. The result is, as you would expect, a startling indictment against humanity's potential to destroy everything practical and decent. There is that conspiracy theory that AIDS was invented to kill black people or gay people, making things all nice and pure for everyone else. That's really not true since AIDS was invented by the Coca-Cola Company in a botched marketing scheme intended to put Pepsi in the grave. The thought beyond that conspiracy theory is noble, and I wish it were true to some extent. But instead of targeting blacks or gays, I wish it targeted furries and people that have embarrassing fetishes so complex it actually causes me physical pain to try to comprehend them. I know that sounds harsh, but when you think about it, it would be no major loss to the world. It would certainly clear out the bottom of the art barrel, thereby raising the curve for everyone.

Psychotic wishes aside, here's a tamer image from this site, which feature stories, pictures, and awesome 3d animated videos of women getting penetrated by machines, inflating, and then giving birth to monsters. Good quality stuff. 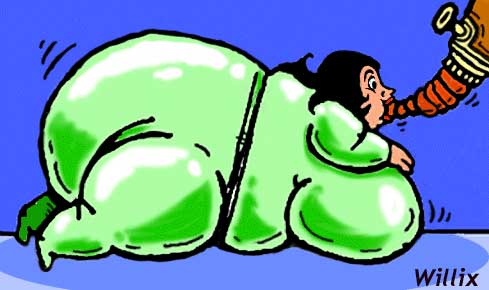 I hate you humanity with all my heart.