With bleeding ears and a defeated spirit, I bring you the first installment of the 46 Worst Musical Happenings of 2008. If you proudly own any of these recordings, or if you're actually a member of one of these ridiculous bands, I sincerely hope you've resolved not to be such a tin-eared fuck-up in 2009. 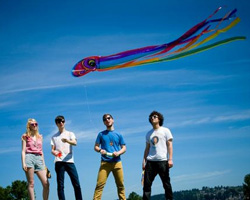 Always flying the rainbow kite.46) Natalie Portman's Shaved Head: Fans of hair-related humor really hit the jackpot with this group: Not only does Natalie Portman's Shaved Head offer a wacky pop-culture moniker, but also it revels in novelty tunes about beard maintenance and sideways ponytails. People who don't find these topics so goddamn hilarious might not be quite as enthusiastic about this falsetto new-wave fantasia, particularly if they have a low tolerance for sassy vocals, shitty beats and bright neon gayness. This is the perfect group for people who want to laugh while they're dancing, despite being too uncoordinated to do either activity individually without tripping over their buffoonish feet and choking on their oafishly hearty guffaws.

Hayden wears dunce cap, little else.45) Hayden Panettiere: Hayden skanks her way through a club during "Wake Up Call," apparently believing herself to be as impervious to sexually transmitted diseases as her invincible Heroes character is to physical harm. Speaking of Heroes, as if the show's fans haven't suffered enough, what with the show becoming a complete fucking joke, now the male viewers who might have fantasized about Hayden being a cool sci-fi chick find out she's actually Paris Hilton, with a slightly worse singing voice. Only people who sat through something as excruciating as the Hiro-goes-back-to-feudal-Japan storyline could possess the crap tolerance necessary to endure the part of this clip when Hayden pulls on a black hooded sweatshirt and starts rapping. 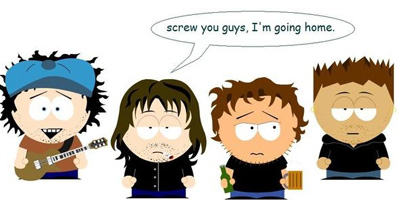 It's unsurprising that a band that lists Alien Ant Farm as a MySpace Top Friend in 2009 still finds South Park spoofs funny.44) The Urgency: This obscure band claimed top prize in the Year's Grossest Chorus contest: "Baby, won't you spread your pretty little lips, make room for my fingertips, so I could get caught between your legs tonight." To make these disgusting lyrics even worse, a) the line changes to "find God between your legs" during the final recitation, and b) the singer looks and sounds like an emo version of the stridently anti-seductive Geddy Lee. When they're not scaring everyone away from sex forever, The Urgency resorts to "hands in the air" rallying cries, which are embarrassing enough coming from club rappers but should be fucking humiliating for an alleged "rock/indie/progressive" outfit.

43) David Cook: I forgot this postmenopausal hearthrob's power ballads immediately after reviewing them, so rather than rehashing his tediously drowsy material, I'll illustrate a comment from esteemed reader Dr. Cynthia Zurla, who wrote to point out the similarities between Cook's mushy head and "a ball of rising bread dough." 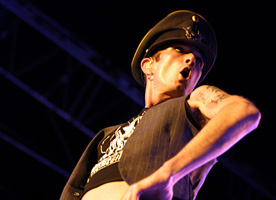 Scott Weiland: Auditioning to be the new Queen singer.42) Scott Weiland: Perhaps still bitter about all the critical beatdowns Stone Temple Pilots received, Scott Weiland apparently strives to make his old butt-rock group sound decent in retrospect. Following Velvet Revolver, which sucked as much as everything else Guns N' Roses-related from the past twenty-five years, comes this haphazard solo album, burdened with the ungainly title 'Happy' in Galoshes. Lyrically, the album pursues an appropriate car-crash theme, while musically Weiland pairs lounge-funk backdrops with terrible David Bowie impressions (including a disgraceful cover of "Fame"). Apparently he's still a real fucking joy in concert, too. Don't throw a beer at the guy, though, because he might chug it and drunkenly plow into you in the parking lot.

Oooh, sexy.41) Jesse McCartney: In 1971, John Lennon wrote "How Do You Sleep?", a harsh indictment of Paul McCartney back when it was novel to call him lame. In 2008, Jesse McCartney, no relation to Paul, released "How Do You Sleep?", just another mundane track on his pathetic album Departure. Thanks to McCartney's shift from pop fruitcake to R&B crooner, he's upgraded his recognizability with black listeners, going from "complete unknown" to "oblivious punchline." He even tries to establish himself as a hip-hop bad boy with "Rock You," on which a guest rapper vouches for his credibility while reciting heroically redundant lines like "I'm rocker than the rocks in Montana." 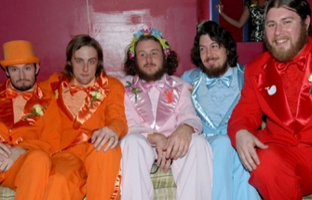 Who would've guessed these guys can't play funk?40) My Morning Jacket, "Highly Suspicious": My Morning Jacket's spectacular misfire could have qualified for a spot in last week's more forgiving dishonorable mention column, given that it's an isolated atrocity. Ranked solely on its merits, though, it's seriously worse than fucking Jesse McCartney. Encouraged by the fawning response to its live Prince covers, My Morning Jacket decided to extend that falsetto mimicry to the studio, adding a bass line that sounds like John "Naughty Naughty" Parr, freshly castrated vocal whimperings, and a robotic chant that's stupider than anything on their beloved Purple Dwarf's numerous miscarried recordings.

39) Family Force Five: These guys want you to dance -- dance for Jesus! -- but as you can tell from the picture below, they're ill-equipped to provide any musical incentive, unless fleeing in panic counts as choreography.