Tuesday, Dec 21, 2004 by Rich "Lowtax" Kyanka (@TwitterHasBannedAllMyAccountsEver)
Know of an awful site? Send it to us and become a hero!

Countdown to Oblivion, submitted by rambo. Some guy claims he's going to off himself on January 13th. I guess it's our job, as Internet citizens, to say insincere crap along the lines of "no, don't do it!" and "you have so much to live for!" Frankly, I think the guy is obligated at this point to put a bullet through his head in a couple weeks or so. He started a page saying "I'm going to kill myself on January 13th," so I think it's only fair of us to expect the deed to be done on that date. Let me tell you something, Jerry: if you don't kill yourself, you're a complete pussy. You've got nothing to live for. Nobody likes you. There aren't any websites dedicated to stopping you from killing yourself, and even if they were, they would be crammed full of animated gifs showing chubby angels pulling up their diapers and blowing kisses. Your pathetic attempt to sponge up attention on the Internet has failed and the only way you'll ever gain the approval you so richly demand is if you actually grow a set of balls and kill yourself. THEN you'd be cool and everybody would accept you for the deep and emotionally complex individual you clearly are. You know, because dead people are awesome. 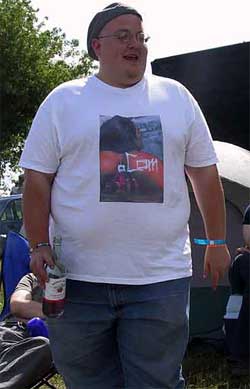 My name is Jerry Romero, and I am 23 years old. If you have found this journal, it is through your own actions. I will not comment on other entries in an attempt to make friends. I am leaving this in the hands of Fate and no-one else. This journal was created solely for the purpose of providing one last lifeline in a vast sea of hopelessness.

On January 13th, I am going to kill myself.

I am going to be posting daily about my fears, anxieties, and state of mind. If, in the month I have allotted, someone shows that they truly care, I will not take my life. This may seem odd to some people. Hell, it even seems odd to me. But even though I do not want to live, I need to know if someone can care. If someone could reach across the void of chance and make contact, I will consider it a sign that someone (God, Allah, anyone) does not want me to die.

Well Jerry, consider this website to be the hands of Fate, and they're flipping you the bird. Nobody on the Internet truly cares, and if you're so gung-ho about dying, then be a man, Hogan, and get it done. We already have enough attention whores on the Internet, and at least they show us their tits.