Thursday, Nov 03, 2005 by Reid "Frolixo" Paskiewicz
Know of an awful site? Send it to us and become a hero!

Snape Mpreg Archive, submitted by Walrat. This is a large site dedicated to Severus Snape from the Harry Potter books becoming pregnant through the action of gay sex. No words can sum up the emotions I am currently feeling about this subject matter.

Severus Snape tugged his robes to drape strategically over his abdomen to better hide the changes in his body. It was becoming increasingly difficult to hide his unwieldy bulk. At one time he had worn his robes open over trousers, shirt and vest. A style that, if asked, he would assert was for greater ease of movement, not for the greater billowing effect this provided when stalking towards students, that was just a perk. It was a manner of dress that he had worn during all his years of teaching at Hogwarts and a style that had always shown off his rather trim form, which was his one point of vanity amongst the other professors of Hogwarts. He might not be the most handsome of men, nor the most popular...but he was fairly young and fit compared to his older and stodgier colleagues. But that slender form was no more. 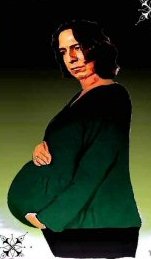 I am going to back slowly away from the computer, press the power button, and walk outside for some fresh air. I recommend you do the same.