The Mighty Minions of Mire

The Mighty Minions of Mire, submitted by specter13. 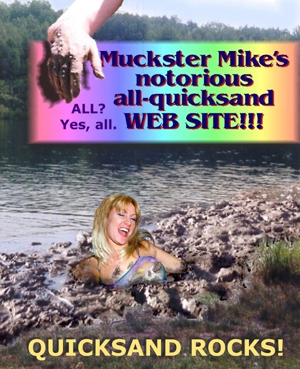 What is this quicksand/mud fetish all about? Well, generally, we find ourselves erotically charged by images, stories and such depicting people in situations involving quicksand and/or mud (usually deep mud). Most commonly, our fantasies involve the opposite sex in such situations, but not always (yes, there are gay 'quicksanders' who are primarily interested in scenes of the same sex sinking).

They are also quick to point out:

More women will be showing up here soon.

Certainly! I'm a bit disappointed that dying in quicksand is a bit uncommon in this day and age, not to mention that it requires a lenghty scouting process that basement-dwelling pervs don't have the motivation and non-bedsore-ridden skin to perform; because of this, the amount of Mighty Minion fatalities must be pretty low. As a consolation, I'd like to think that anyone who attempts to recreate quicksand fanfiction by renting a backhoe will be chased out of town with power tools, far from any place with internet access.