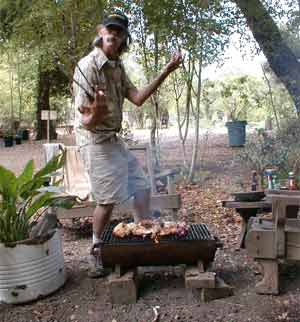 Coffee Donut, submitted by ReDiNmYhEaD. One of the great advantages of living in a time when the Internet exists is that it is around for unbalanced people to document their insanity. In this case a 49-year-old man known only as "Keetz" records his wild and insane midlife crisis. He has quite an addiction to caffeine, possibly surviving cancer in the process, and has gone to live on some sort of creepy religious retreat. His writing borders on incoherent, but from what you can read (...'read...) he is convinced basically everything is a conspiracy. Unlike most conspiracy-theory websites, however, it isn't just the theory that is completely crazy, it's also the author.

That's tame compared to some of the stuff on the site, which I might add is all done using some sort of portfolio template. I gather that along with his battle with the devil caffeine, Keetz also lost his job and possibly his family, as he mentions being (...'not-wealthy'...) several times. As for the rest of it, well, he seems to want to take on pretty much every problem and non-problem in the world. God be with you, Keetz.