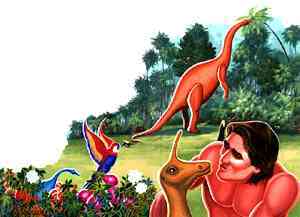 The Great Dinosaur Mystery, submitted by Moving Walkway. Christians are often unfairly viewed as ignorant, uptight and self-righteous assholes. Those Christians who do not exhibit one of those three traits should probably be angriest of all at Christiananswers.net, the website that serves as a sort of Christian-themed encyclopedia of anti-information. It would be a great joke, were it a joke, but instead it encourages Christians and the Christ-curious to throw aside thousands of years of learning and science and become as stupid as possible.

No section is more idiotic on Christian Answers than their section on dinosaurs. In a seemingly in-depth examination of dinosaurs, the web site explains at painstaking length why all science related dinosaurs is wrong and then proceeds to tell you why a T-rex would not eat Adam in the Garden of Eden (all dinosaurs ate plants at that point).

Part of God's purpose for creating the particular types of dinosaurs that become very large was surely to impress Man. Dinosaurs showed the great power of the Creator. No matter how big these creatures got, Adam knew God was always far greater. God designed every part of them, right down to the smallest cell. Even the largest dinosaur was like an obedient puppy in God's wise, powerful hands.

You can learn so very much non-information about dinosaurs on the Discovery Trail! Be sure to take the hilarious Dinosaur Quiz that will really test your ability to retain a bunch of made-up bullshit.