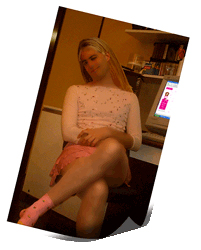 Sometimes I turn on the Internet and say, "Internet, what new disgusting parts of humanity will you show me today?" Thankfully, all of you are here, so I don't have turn this gun on myself. Granted, it is an NES Zapper, but the noise it makes can drive a man to madness. Here is what caused me to introduce this Awful Link with a dumb 80s reference:

Now I´m 22 years old, and in spite of having a male´s body, I can consider myself as a real girl: I play games for girls on my PC. I think the same things girls do, I would say that I have the same feelings, the same ideas, I like the same things that girls like. (Only that I don't like boys or men, I only like girls, I like them so much that I would like to become one of them. For me, they´re like goddesses. But a note here: I´m 100% AGAINST child abuse)

My mom knows about my problem, that I would love to become a little girl. She makes me go to a psychiatrist. I go there twice a week. The psychiatrist is really a headache, I hate her, I don't want to be "cured". I just want to make my dream come true, to BE as girlish as possible. Nobody understands that.

In a couple of years, when I´ll have my own house, I´ll buy tons of frilly dresses, pantys, pink skirts and T-shirts, baby nappies, barbies and dolls and everything to live as well as a girl. About my bedroom, it´ll have pink walls, a My Little Pony baby cradle maybe ,many barbies and teddy bears, other dolls to play with and many babydolls and dresses and pantys.

Thanks internet, for teaching us to vomit at the antics of perverts again.