Britney Spears Brought To Light, submitted by Chuck. No, "brought to light" doesn't mean Britney's implants explode and cause a red-hot, roaring fire (unfortunately), it means… umm… who cares, this guy is a few "Lucky Charms" short of being magically delicious. It all starts out as a relatively harmless fan page authored by a 25-year old loser (who can't seem to spell her name correctly half the time) but quickly turns into the absolute most disturbing, sick, and - dare I say - AWFUL fan pages ever created. My best guess is that Britney's legion of marketing sluts tried to brainwash this guy, messed up, and turned the guy into a scary Britney zombie with serious mental issues and access to a freeware HTML editor, which is NEVER a good combination. Here we go:

"I am a very big fan of Britney Spears ...I'm a 25 year old guy and yes I think Britney Spears is very sexy but to me that pales in comparison to who she is inside. I get excited whenever I hear anything about Britney Spears ...Me and Britney are a lot alike ...we are both very impatient but if there was no such thing as impatience then you would not try so hard to get what you desire in life ...we are both very sweet and kind people although she shows that side of herself much more noticeably and passionately ...like her I never give up although many times I sure felt like giving up ...God always seemed to have come to the rescue ...Britney Spears started and fully supports a camp for underprivileged kids and I dream about donating billions some day to a good cause [rambles on for another eighty pages]" 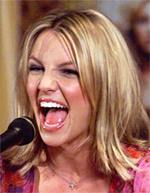 The creature! Its horrible wail! ARGH! Oh wait, it's another #1 hit!

Oh yeah, you two are friggin' soulmates. Oh wait, I can think of a few small differences between you two. For one thing, Britney is a mildly-hot hussie with good producers and music video directors who probably keeps all her money in a huge twelve-story money bin Scrooge McDuck-style, while you are a pathetic snorting geekwad who can barely see what you're typing because your monitor is covered with two gallons of saliva thanks to your filthy habit of licking every Britney JPEG you download until you hear Britney's voice in your head screaming for her security guards to "get this psycho out of her dressing room before he manages to unloosen his draw-string sweatpants and unleash his bumpy little friend." Right.

To give you some insight into this fine fruitball's state of mind, check out this painstakingly rendered Christmas Card to Britney, this rambling unreadable mess which he tries to convince everyone that Britney is still an innocent virgin who's waiting for the perfect Internet fanpage maintainer to bust her seal of freshness, a vehement incomprehensible defense against the sound byte of Britney swearing before a concert in Rio that's floating around (he claims it's a total fake), and his list of similarities between Britney and himself (big surprise, he's a virgin!). This is also the page where he declares "even if she were to have a sex change and became a man ...I'd still adore her, admire her, think that she's very pretty, think that she's very sweet and I'd still love to marry her." This guy probably fantasizes of mutilating Britney's genitals, sewing on some corpse's penis, and getting reamed by man-Britney in a wedding dress on the beach.

"It's like I live just to make Britney happy and like I live to adore her and other than saying that I think that she's so wonderful, sweet, adorable, beautiful and all the other good stuff about her I really don't have an answer other that I just do love her so much and it's much deeper than what she looks like, how she acts, how wonderful I think that she is ...it goes way way deeper than that ...it's like her soul is calling out to mine. No one's perfect but there's such a thing as perfect in the heart and she's perfect for and to my heart. To me just the thought of spending time with her is like reading a beautiful poem or watching a butterfly fly by. I actually cherish her so very much."

Oh, but wait! It gets better! This potential stalker certified loony-toon has crafted some heart-warming audio tributes to his sole purpose for living. The results? Cover your head folks, we've struck comedy oil! Black gold! Texas tea! Thank god some former German War Criminal invented MP3 encoding so stalkers could share their masterpieces with the rest of the world! His original server storing the mp3s went down due to heavy traffic from this site, but we managed to save them to our server. I can't believe there are mp3s this bad out on the Internet and we didn't create them.

Britney I Cherish You - This guy is 25-years old? He sounds like what I envision a puberty-stricken Peter Brady would sound like after smoking pot, getting hit in the face fifteen times by a football helmet, and spending three straight days awake listening to Jan whine about how all the guys like Marsha better since Jan's braces cause too much damage to their sensitive areas. The best part is near the end where he begs Britney to let him comb her hair and then allow him to look deep into her eyes so he can possess her immortal soul. I won't spoil the thrilling conclusion for you, though.

Fantasy Britney - I swear to god, this guy's voice makes mine sound like Issac Hayes by comparison, and my nostrils are probably clogged up by fifteen tons of mucus. He even makes Semi Automatic Turban's screeches and screams sound soothing and beautiful. I think he's trying to rap during the first part and then tries to sing like Britney mid-way through. The best line has to be the bit about being a murderer. Britney, please be sure to underpay your security guards; I can't imagine the amount of hilarity that would ensue if this guy ever confronted her in person. He'd probably sing her a wedding proposal while all the zits on his face burst at the same time, on cue, all over her dress.

Set to Failing - Congratulations sir, you've failed the game of life! Best line has something to do with water - I won't spoil it for you. I know I've already said this, but… THIS GUY IS NUTS.

That's True Love - Dear sweet Jesus. The nutty frog boy manages to croak out a soulful ballad in which he wistfully claims that true love is seeing the person you're looking at on your computer screen sitting next to you. Once again is it any surprise this guy is a virgin? Please fall in love with something else, hump a wall, ANYTHING! And for God's sake don't MP3 your post-coitus ode to drywall either.

To top it all off this guy has a collection of his favorite bible verses and about twenty manifestos of rambling nonsense regarding a secret conspiracy to spread nasty rumors about Britney's fingernail clipping habits or some such crap. I can't wait until this guy sends me a fifty-page email yelling at me for mocking his site, explaining carefully with the use of bar graphs that even if Britney was his grandmother he'd still want to pull down her bloomers and make merry with the baby popping. Why? Because he and Britney were meant to be together and she's flirting with him through his computer every day, that's why! AH, IT ALL MAKES PERFECT SENSE NOW! The way to a man's heart is through his stomach, and the way to a female pop-star's heart is through AOL's Magic Internet Connection!

SUPER BONUS!!! Would you believe this guy has a horrible MP3.com page where he showcases his terrible comedy MP3's and hip-hop disasters? This guy can't be for real, nobody out there is that lame... right? RIGHT? Please God, let this be a sick, twisted joke.