Monday, May 21, 2001 by Rich "Lowtax" Kyanka (@TwitterHasBannedAllMyAccountsEver)
Know of an awful site? Send it to us and become a hero!

ThE ELW HoMePaGe, Extreme Live Wrestling, submitted by Jared. Highschool dropouts and future child molesters battle each other in an attempt to damage each other's eyesight, thus making this webpage seem less horrendous and offensive to mankind. The incredible twist that separates this moronic "wrestling" league from all the other teenage failures lies in the fact that the white trash choose to battle each other in the middle of their parents' living room. 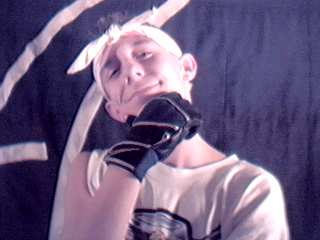 It all happened when two ELW members, Vinny da Ginnie and Humanty were sitting in Humanty's living room and were being very board, so they both decided to gather up some cusions and wrestle. Every time Vinny DA Ginnie would go over they both would wrestle. They decided to call this Extreme Living-room Wrestling. When Vinny DA Ginnie and Humanty told there friends what they have been doing, they wanted to do this to.

Like in all sports, the ELW eventually matured and moved from the livingroom to the backyard, but the ELW acronym still stands. This is undoubtedly so the countless legions of ELW fans don't have to bother learning a new series of three symbols to remember, since they probably have enough trouble with their own cellblock number.

This sentence would make a lot more sense with a "minor" edit. Let me go ahead and take the liberty of doing so.

Ahh, much better! Make sure to check out their wrestling biographies which contain such memorable quotes as, "Women flock to me, sometimes I even have to beat them off with a stick because they can't get enough of my huge dick." Woah there, tiger! Looks like somebody's taken too many dives off mom's couch!

PS: There's a guestbook you can sign, but I assume you have to be fairly "hardcore" to do so. Good luck!