The Trampled By Heavy Animals Exploratory

Monday, Jul 02, 2001 by Rich "Lowtax" Kyanka (@TwitterHasBannedAllMyAccountsEver)
Know of an awful site? Send it to us and become a hero!

Welcome to Don Kichote's and Presston's page! You have entered a new space. A space seldom explored before. It is the space which exists between terra firma and an animal's foot. Join our intrepid explorers as we chart new discoveries! Our exploits are sure to become legend! Be a part of it and come explore with us! Right now, Don Kichote is exploring the space under horses' hooves. But who knows what the future holds? Camels, Rhinos or maybe even elephants!

...I love elephants. More specifically, I love elephants' feet. They are flat, smooth and spongy in a hard kind of way. For a long time I fantasized about having the strength to let one stand on me. You know like in a circus stunt.

For a long time I tried to get a job working around elephants. I read almost every book I could find about them. And my fantasies grew. Well, about a year ago I finally landed a job in a zoo close to me. I don't want to disclose the name of the zoo. I could lose my job...

...The next moment he felt an extreme biff on his right upper-leg and the cold iron of a horseshoe pressed deep and hard in his flesh. "Aaargh! My leg!", Marc cried with a high voice. The hind-leg of the stallion then came down on his other upper-leg but grazed it, ripping the skin. Marc crouched and reached with his hands to his wounded leg. He saw a sharp hoofprint pressed in the skin of his leg and blood-spots marked the place where nails had pierced the skin. It hurt awful but it didn't feel like it was broken. Marc shivered and wondered how far Jessica would go. Was she only scaring him and would she stop after this 'warning'?

WOW! WILL JESSICA STOP AFTER THIS WARNING? WILL THE HORSE CONTINUE TO TRAMPLE PEOPLE? WILL MARC BLOW HIS LOAD ALL OVER THE BALE OF HAY? TUNE IN TO THE NEXT EPISODE OF "SEXUAL PERVERTS BEING CRUSHED BY FARM ANIMALS THEATER" AT 10:30! Make sure to bring your own KY Jelly, as the horses just get really pissed off when they're slipping and sliding all over the place.

[Hoofprint] If you were asked by John or any other person, employer etc. Would you let one of those women ride a horse over/on you?

[Rudy] If they asked I'd probably do it. I could truly refuse them nothing : )

Hot! Spicy! Bone-crushing ecstasy that can only be reproduced by possibly falling down an elevator shaft and having an obese man use your crippled and broken body as a pork tenderizer! Be absolutely sure to check out the movie section devoted to Don Kichote forcing a horse to step on him, even though it's painfully obvious that the horse knows the guy's a fucking freakcase and wants absolutely NOTHING to do with him. I honestly can't blame the horse, and the only thing keeping myself from putting a bullet through my skull right now is the fact that these nutballs have probably had all their sperm crushed into a fine powder, so they have absolutely no chance of reproducing. Not that people can mate with horseshoes anyway. 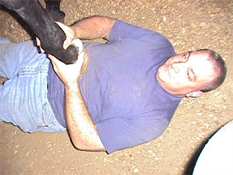 Here is the shot Casolai took just prior to Dover picking his other hoof up. As he stood on me with both feet, the darned camera was busy saving the photo to disk. By the time it had finished, Dover had cracked my rib. Resulting in me of course rolling him off of me.

Sometimes love hurts, despite what the spousal abuse worker told my mom frequently while she was in the hospital. Ha ha, I am of course kidding! My dad never beat my mom, he just let the horses trample her in extreme moments of raw sensuality!