Enjoy February by not going to the cinemas. Joseph "Jay Dub" Wade and Martin R. "Vargo" Schneider learn the truth of this the hard way as they endure Pompeii and About Last Night respectively.

EXPECTATIONS: When I was a youngster first learning about the broad strokes of history, the destruction of Pompeii in 79 AD was one of those events teachers always kept coming back to. For whatever reason, it was really important for second graders to learn about a city getting blown off the face of the Earth by a volcano. Oh, did I just spoil the ending for some of you? I'm sorry.

REALITY: Pompeii opens with a quote from Pliny the Younger, describing the destruction of the city as he watched from a distance. The film wrongly attributes this quote to Pliny the Elder, who actually died in Pompeii that day. This is everything we've come to expect from director Paul WS Anderson in a nutshell, whose most faithful adaptation of anything is still somehow Mortal fucking Kombat. Yet while its grasp of history is positively Wikipedian, Pompeii is at its best when Anderson is channeling his inner Roland Emmerich. 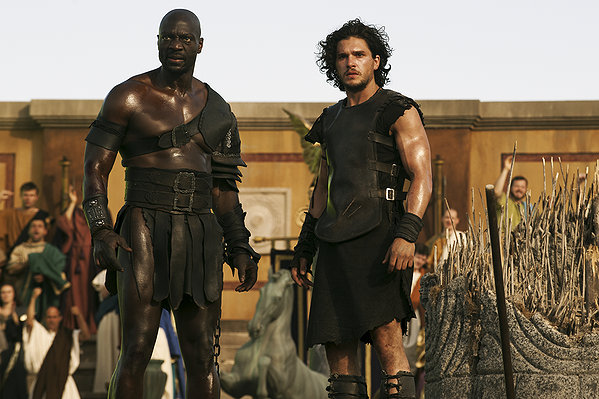 Are we channelling our inner Roland Emmerich yet?


After his family is murdered by Roman soldiers, a Celtic boy named Milo is captured and sold into slavery. Years later, Milo (TV's Kit Harington), now one of Britannia's greatest gladiators, is shipped off to fight in the Roman city of Pompeii. There, he meets the city's champion fighter Atticus (Adewale Akinnuoye-Agbaje), who is one fight away from earning his freedom. By chance, he also meets Cassia (Emily Browning), the daughter of one of the city's leaders (Jared Harris). The two fall in love just in time for the Roman Senator Corvus (Kiefer Sutherland) to arrive and demand Cassia's hand in marriage.

While the conflicts between these characters play out, the film keeps panning the camera upwards to Mt. Vesuvius looming in the distance. In fact, most scenes end this way, just in case we don't yet know where all this is going. Atticus warns the Celt that he will take great pleasure in killing him in the arena. Then, as he rests his head back in contemplation, we pan up through the dungeon ceiling, past the awning of the coliseum and out toward the mountain, smoke rising from the top like a supervillain waiting to spring its master plan. It would appear ominous if only Anderson weren't so insistent about it. By the tenth time this happens, it's practically a joke.

The characters and their stories are only barely sketched out, because the real reason people are buying tickets to Pompeii is to see that digital volcano go on a rampage. When the mountain erupts, Pompeii switches gears from a gladiator film (whose plot is almost beat-for-beat the same as last month's Hercules) to a bona fide disaster epic. In doing so, Anderson leaves no stone unturned. Ships are wiped out in the harbor by flaming projectiles; the earthquake sends a tidal wave crashing into the city; a rain of stones kills thousands in the streets. 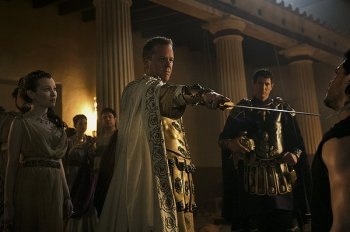 Now we're talking.This is disaster porn on the level of any given half-hour of Roland Emmerich's 2012, and its every bit as ridiculous. Remember the scene in 2012 where John Cusack outruns a volcano in an RV? Kiefer Sutherland does that in a chariot. On the one hand, sure, what else is he going to use? On the other hand, Jack Bauer outruns a volcano in a chariot! And before that, Atticus outruns a ship that was picked up by the tidal wave and sent barreling through the streets. The third act of Pompeii mainly consists of people fleeing increasingly inescapable circumstances and somehow surviving. On the basest of levels, this is actually pretty entertaining.

It helps that Kiefer Sutherland gives us a wonderfully hateable villain. Senator Corvus is a consummate slimeball, due in no small part to Sutherland's spot-on Jeremy Irons impression. I don't know if this was the plan from day one, or if Sutherland showed up on set doing lines from The Lion King, but he is by far the most entertaining thing going on in this film. And that's saying something given the previous paragraph. Sutherland's screen presence makes up for the fact that Kit Harington's barely even registers.

The eruption of Vesuvius interrupts the film's best scene, in which Corvus forces Atticus and Milo to reenact the massacre that wiped out the Celt's people; a massacre that Senator Corvus committed. All the drama of the film comes to a head here, and we get to watch five doofuses in giant golden helmets recount the death of Milo's family. The eruption becomes something of a blessing in disguise, because even though it undercuts a great buildup of dramatic tension, it saves us from having to watch anymore of Anderson's garbage swordplay. With all the Resident Evil films in Anderson's resume, you'd think he would eventually figure out how to cut together a decent fight scene. You would be wrong.

Pompeii is a film of simple pleasures, many of which are incredibly silly. The romance between Milo and Cassia barely has enough material to count as a B-plot, and Cassia's father struggling to curry favor with Rome gets even shorter shrift. We're not meant to care about the lives of these people, because fate is about to erase those lives in an instant. Their deaths are just about the only things the film does ask us to invest in, and in doing so essentially becomes a farce. If history has proven anything, it's that we love watching people suffer, whether it's in the gladiator pit or while wearing 3D glasses.