Psycho Casting Page, submitted by R-Lo. What would an entire post be about fetishes without following it up with a fetish ALoD? I guess we won't find out thanks to the dilligent work of Lowtax, who uncovered this gem while searching out info on the cast of the 1998 remake of "Psycho" for his intensely homoerotic Vince Vaughn fan site. As you may be able to infer from the title of this particular site, it's about a crazy fucker named Grant who finds people in casts highly erotic and devotes his web site to sharing this particularly odd fetish with you. Now I'm not saying this one is up there with the Japanese Fart videos or the guy who got off on popping balloons, but the sheer number of fetishes devoted to mundane everyday things is more than a little troubling. 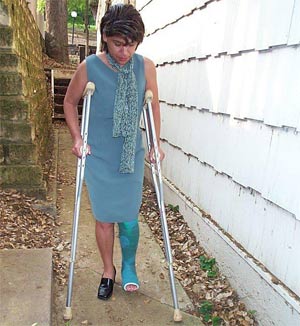 I started off wanting a lac/slwc combo for my out-of-town adventure but decided on just a slwc this time. I ended up going to two malls (pix 1-7; pix 8-11). After all that walking we went back to the hotel room, relaxed and drank a few beers. Unfortunately so far there were no comments about the cast. I guess a slwc is somewhat easy to overlook. But at one mall (pix 1-7) we saw a teenage guy in a black halo brace walking around with ease.

When looking at the picture archive, the guy totally lost me and completely changed my view on fetishes. I always assumed people who had oddball fetishes like this were just like normal people with that fetish in addition to their normal sexual desires. However, based on the pictures, I realized that Grant doesn't care what the person looks like; he just cares about the cast. He has all these photos of mannish and frumpy women wearing casts, describes how exciting it was to see some teenage boy in a halo... the casts represent the whole spectrum of this guy's sexuality. I mean, even the balloon popping guy talked about how great it was to see beautiful women popping the balloons with their breasts; this guy could just nail a cast to a wall and lay back in bed. "Live and learn," my mother always said. I don't want to learn this though, so I'm going to go drink that ant poison I have in my kitchen.

PS: The CastMan has a guestbook you can sign. Break a leg, fellahs!