This week, Ian "ProfessorClumsy" Maddison takes a look at Guy Ritchie's modern take on Sherlock Holmes, and those dashing Cinema Discusso goons talk about their top films of 2009, which is the year that just now passed. 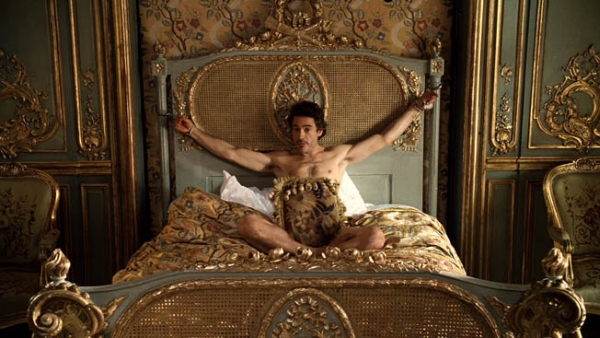 REALITY: Set in London, during its famously historical past, Sherlock Holmes is the story of an investigator whose name is Sherlock Holmes, like the name of the movie (he's what we would call the "title character"). Holmes (Robert Downey Jr.) and his sidekick Dr. John Watson (Jude Law) run around London getting into all kinds of larks and hilarious scrapes with large men and dimwitted local police officers. Their primary goal during these shenanigans is to get the better of slightly dull villain Lord Blackwood (Mark Strong). It's basically Britain's answer to Lethal Weapon.

Sometimes it can be hard to form a solid opinion on something when the whole is lesser than some of its individual parts; Sherlock Holmes is a perfect example of this, jumping from scene to scene with little regard for its audience's empathy or basic narrative comprehension. I couldn't explain the plot in any depth, because it passes noisily like a train in the night and is forgotten just as quickly. In fact, to effectively describe the plot would require Robert Downey Jr.'s inimitable, fast-talking vocal stylings, which I've affectionately nicknamed "flubberty-druthers."

The film certainly has its moments, most of them involving the dynamic between Downey and Law. They make a terrifically entertaining double act, arguing about paying the rent and taking trips to the country like Withnail & I, only with jobs. However, there's also a slightly contrived attempt to cause a rift between them, which plays out in multiple scenes that lead to the same conclusion: Watson realising he just can't get on without Holmes and toddling off after him on another crazy adventure.

Nice shades, Holmes!Many scenarios and characters just don't go anywhere. For example, I had no idea why Rachel McAdams kept showing up and not doing anything. It's like they needed a female character amongst the leads, so they wrote her parts while they were having breakfast. And Mark Strong, who I usually find very entertaining, has little to do as the film's antagonist. He's a very uninteresting villain, and a largely ineffective one at that.

The main problem is that there's no real dynamic flow to the whole thing. We have the scenes in which Holmes flubberty-druthers lengthy explanations of how he managed to deduce the next plot point, and then there are the action scenes where Holmes and Watson pummel large men three at a time. Some of these scenes are preceded by a kind of slow-motion prologue during which Holmes describes exactly what he is going to do in voice-over flubberty-druthers and then goes ahead and does exactly that, which just seems like a waste of my time. Everything in between is male bonding and farting dogs.

On the matter of the Sherlock Holmes saga as a whole, I have absolutely no idea where this story is supposed to fit in chronologically. We get the impression that the partnership between the two legendary sleuths is reaching its end, but the denouement hints that this is actually the very beginning of the saga. The whole issue felt like it wasn't thoroughly thought-out. Entertaining in places and tiresome in others, Sherlock Holmes is just a little unsatisfying. Which makes it Guy Ritchie's best film yet!