It's one for the ladies this week, with Tangled marking the latest contribution to the Disney Princess canon and Burlesque delivering Christina Aguilera's unasked-for acting debut. The Current Releases Crew, having far too many Y chromosomes for its own good, does its very best to understand things like "emotions" and "periods."

Tangled: Disney Return to their "Roots"... Get it? Hair has Roots.

EXPECTATIONS: Tangled has a bit of a rocky production history. Before it was called "Tangled," it was called "Rapunzel." Before that, it was called "Rapunzel Unbraided." Before that, it was going to be a traditionally animated film styled after the oil paintings of Jean-Honoré Fragonard. Before that, I assume the people at Disney were sitting around with their thumbs up their asses trying to think of a way to out-Shrek Dreamworks. With all of that in mind, you'll understand if my expectations are kind of low. It's not that I don't have faith in Disney to put out a CGI princess musical that doesn't completely suck, but I ...

REALITY: Before I begin, I'd like to point out that nine critics out of ten are simply incapable of reviewing Tangled without making a bunch of stupid hair-related puns. Does anybody actually think this is funny or clever? The title of the movie is already a hair joke (and a bad one, given that Rapunzel's hair never once actually gets tangled). It's just like that Legend of the Guardians movie last month. Some people just couldn't go two sentences without writing things like "This film has wings!" or "It's a hoot!" and thinking they were being original as they were doing it. It's not so hard to resist this urge really. Watch, I'll show you how easy it is ...

Call it luck, call it fate, call it corporate synergy. Whatever you call it, what Walt Disney Studios has done is nothing short of amazing. They released yet another one of their staple animated musicals featuring a cute princess and lots of love songs, and somehow it's NOT the girliest thing you could have seen this weekend. In fact, judging from the trailers for the rest of the Thanksgiving weekend offerings, I'd say it's also the least embarrassing. No one gives a grown man at a Disney movie a second thought anymore, but let yourself get caught buying a ticket to the movie where Jake Gyllenhaal sells people Viagra and expect to hear some interesting rumors come Monday. 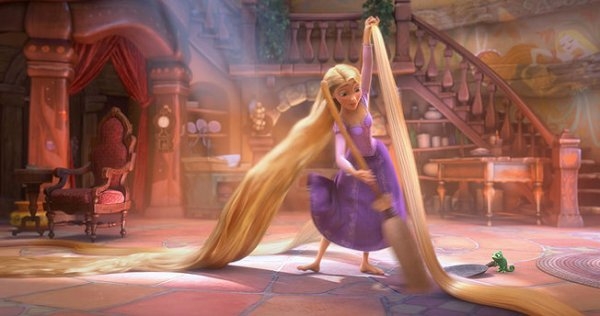 Disney includes a housekeeping scene in all of its princess films in order to prepare young girls for the life that awaits them.

No, Tangled is a far better choice. And I'm not even being weird or ironic when I say that. It's actually a very good film. Too bad all the marketing is shrewdly designed to hide that fact from you.

Tangled is, for the most part, a pretty straightforward retelling of the fairy tale of Rapunzel. In this version, a princess is born with magical hair that can heal the sick and keep the old young forever (or at least until Rapunzel dies). Realizing the baby's power, a witch (Donna Murphy) kidnaps her and raises Rapunzel as her own, hidden away in a tower out in the middle of nowhere. 18 years later, a jewel thief named Flynn (Zachary Levi) stumbles upon the tower while running from Johnny Law. After a thorough beating from a now grown Rapunzel (Mandy Moore), Flynn agrees to help her escape the tower and take her to see the annual lights from the nearby castle. Songs, romances, narrow escapes and personal revelations ensue.

In attempting to bring its old standby genre into the 21st century, Disney did the smart thing and made this movie pretty much the way it always has. "What's old and hokey is new and totally doesn't suck again," as it were. Many critics seem hellbent on comparing Tangled to Beauty and the Beast. I guess that's so they can say, "Yeah, Tangled is pretty good, but look! This older one is totally way better." Like people forgot that movie existed or something. I'm going to go out on a limb and say this movie bears a closer resemblance to Aladdin than anything else. The CG animation has the same look and feel of that film's hand-drawn style. Also, Flynn feels too much like an Aladdin knockoff character, and he gets so much screen time that it's kind of hard for me to NOT make that association. Without listing off a hundred nitpicky details, suffice it to say that the movie hits all the marks of the better Disney films while rarely stumbling across the pitfalls of the terrible ones. 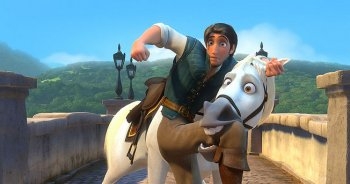 It's exactly what it looks like.Granted, composer Alan Menken's work in this film is nowhere near as memorable or iconic as any of the Disney films he scored twenty years ago, but the songs in Tangled are all at least passable. I can't for the life of me remember any of them 24 hours later, but I can confidently say that none of them were unbearable. That ought to count for something. Maybe in twenty years, we'll be comparing the music in Disney's next fairy-tale reinvention to Tangled:

"Yeah, these songs are okay, but remember the songs in that Rapunzel movie? That one song um ... what was it? Something about dreams? Whatever. Those sure were some good songs!"

If there's anything I really have to call the film out on, it's that it periodically assumes the audience is mentally challenged. Without going into too much detail, the whole opening monologue more or less spells out the entire film for us. Why did they do this? Do they really think the audience is that stupid? Or are they worried that we'll be shocked at how the movie ends? Maybe they did it because nobody really starts paying attention to a movie until ten minutes in. Exposition is stupid anyway, right?

No, it isn't. The first lines in a film are just as crucial as the first explosion; occasionally they're even more important. If you can't set up an interesting story without giving everything away, maybe you shouldn't be telling that story.

But perhaps I'm being too harsh here. Pardon me for expecting more from the company that invented animated movies. Aside from the opening narration falling flat on its face, the lion's share of the film's story is very well told. It's already a pretty brief story, but with some good twists and turns and a handful of scenes of Flynn getting beat up by a horse, Tangled manages to be consistently entertaining and often edges toward greatness. It maybe could've used some more horse-punching, but that's just me.

Of course, if you've never been one for Disney movies or musicals or princesses or any of that fairy-tale crap, nothing I say here is really going to change your mind. However, if you DO have even a passing interest in at least one of those things, then there's a fair chance Tangled might wind up surprising you.

MINORITY REPORT: It's a hoot! No, wait ... that doesn't make sense here. To hair is human! Yeah, that'll do. -Ian "ProfessorClumsy" Maddison